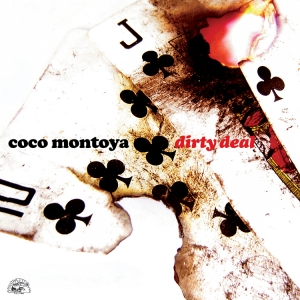 GuitarOne magazine calls guitarist/vocalist Coco Montoya "the hottest southpaw in the blues" and raves about his "master touch and killer tone." The Boston Globe succinctly states that Montoya's music is "hot, blistering soul." From his early days as a drummer to his current status as one of the top-drawing guitarists and vocalists on the blues-rock scene, Montoya earned his status through years of hard work and constant touring. And it all started with a chance meeting in the mid-1970s with legendary bluesman Albert Collins, who offered Montoya a gig as his drummer. Albert took an immediate liking to Montoya, becoming his mentor and teaching his new protégé the secrets of Collins’ "icy hot" style of blues guitar. Five years later, British blues icon John Mayall happened to catch Montoya at a jam session and was blown away. Mayall recruited him as guitarist in the legendary Bluesbreakers, and Montoya spent the next 10 years touring non-stop, proving himself to be a world-class guitar master in one of the most renowned blues bands in existence.

Since stepping out as a bandleader in 1993, Montoya released five solo albums and performed non-stop at clubs, concert halls and major festivals all over the world. At every show, fans' jaws dropped, and critics raved about Montoya's mind-bending guitar licks and fervent vocals. "The fiery blues that issue forth from Coco Montoya's guitar are awe-inspiring and boogie requiring," says The Village Voice. With his CD, Dirty Deal (joined by his friends from Little Feat), Montoya turns up the intensity with another dose of his feral, soul-stirring music.

On Dirty Deal, Montoya, along with his road-tested, red-hot touring band, once again uses blues as a blasting off point for his emotional, soulful music. With his icy-hot guitar playing and his passionate, unaffected vocals, he attacks each of the 11 songs with deep feeling and ferocious energy. Montoya's friends, Little Feat members Paul Barerre, Kenny Gradney, Richie Hayward and Bill Payne, add their unique talents to the mix as well. Produced by Barrere and engineer Roger Cole, every song on Dirty Deal—the rockers as well as the ballads—burns from start to finish. Montoya brings all the unbridled force of his acclaimed live shows into the studio for a foot-stomping, guitar-fueled ride. Dirty Deal is Montoya's rawest, most stripped-down and impassioned recording to date.

Montoya first met Barerre and Little Feat at a blues festival and instantly hit it off. According to Barerre, "Coco's playing was inspirational to me, great tone and attitude." The band invited Montoya to their annual Feat Festival in Jamaica two years in a row. "Our fans took to him like butter on bread," recalls Barerre. "He fit in so well with the band that I knew I had to produce him. I really wanted to get that live feel from him on a recording, and that's just what we did. He rips the guitar solos, and his voice is as strong as three-day-old coffee."

2002's massively popular Can't Look Back raised the bar even higher. GuitarOne said Montoya has "a master touch and a killer tone." The Memphis Commercial Appeal called the CD "a party-packed set of blues guitar licks, rock hooks and soulful singing." With radio support equally strong, Montoya's touring kept his visibility high all across the country as he packed one concert after another, always leaving fans screaming for more.

Averaging over 150 tour dates a year, Montoya continues to pack clubs and theaters around the world. He has played major festivals, including the New Orleans Jazz & Heritage Festival, The Chicago Blues Festival, The San Francisco Blues Festival and Canada's International Jazz Festival. It's no coincidence that publications from The Philadelphia Daily News to Blues Revue to Living Blues to The Village Voice all rank Coco among the best guitarists and singers on the blues scene. "Montoya is at the forefront of the contemporary blues world," declared Guitar World. "He is one of the truly gifted blues artists of his generation," said Living Blues. With Dirty Deal and continued non-stop touring, Coco Montoya continues to share his gift with his legion of admirers all over the world.