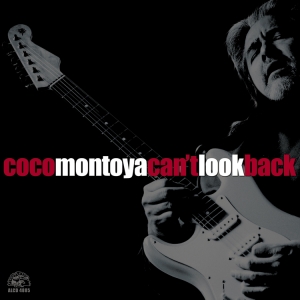 Over the course of his 30-year career, guitarist and vocalist Coco Montoya’s explosive guitar playing and soul-driven voice have propelled him to the upper reaches of the blues-rock world. From his early days as a drummer to his current status as one of the top-drawing guitarists and vocalists on the blues-rock scene, Montoya has forged his reputation through years of hard work and constant touring. And it all started with a chance meeting in the mid-1970s with legendary bluesman Albert Collins, who offered Montoya a gig as his drummer. Albert took an immediate liking to Montoya, becoming his mentor and teaching his new protégé secrets of the Collins “icy hot” style of blues guitar. Five years later, John Mayall happened to catch Montoya at a jam session and was blown away. This led to Montoya’s touring the world for ten years with the legendary Bluesbreakers. Since stepping out as a bandleader in 1993, Montoya has released four solo albums and has performed non-stop at clubs, concert halls and major festivals all over the world. At every show, fans’ jaws dropped, and critics raved about Montoya’s mind-bending guitar licks and impassioned vocals. “The fiery blues that issue forth from Coco Montoya’s guitar are awe-inspiring and boogie requiring,” shouted The Village Voice. “Blistering, pure blues,” cheered Blues Revue. Now, with Can’t Look Back, Montoya turns up the intensity with another dose of his feral, soul-stirring music.

On Can’t Look Back, Montoya once again uses blues as a blasting off point for his rock solid, groove-laden music. With his icy hot guitar playing and his soulful, unaffected vocals, Montoya attacks each of the 13 songs with deep feeling and ferocious energy. Produced by Jim Gaines (Luther Allison, Santana, Stevie Ray Vaughan), every song on Can’t Look Back (including five Montoya originals) burns from start to finish. From the scorching Wish I Could Be That Strong to the grooves and passion of Trip, Stumble And Fall to the ear-catching Can’t Look Back to the reinvention of Albert Collins’ Same Old Thing, Montoya brings all the unbridled force of his acclaimed live shows into the studio for a
foot-stomping, guitar-fueled ride.

In 2000, Coco’s Alligator debut, Suspicion, quickly became the best-selling album of his career. “Powerhouse blues,” exclaimed Guitar Player, “searing tone, emotional soloing, and energetic, unforced vocals…stunning.” With regular radio airplay on over 120 stations nationwide, Montoya’s fan base exploded. The record held the number one position on the Living Blues radio chart for three straight months. And it landed on the Billboard Blues Chart for 11 weeks in a row, peaking at number 11. Features and reviews ran in Billboard, Guitar Player, The New York Times, Blues Revue, JazzTimes, The Chicago Tribune, and countless other national and regional publications.

Averaging over 150 tour dates a year, Montoya packs clubs and theaters around the world. He has played major festivals, including the New Orleans Jazz & Heritage Festival, The Chicago Blues Festival, The San Francisco Blues Festival and Canada’s Inter-national Jazz Festival. It’s no coincidence that publications from The Philadelphia Daily News to Living Blues to The Village Voice all rank Coco among the best guitarists and singers on the blues scene. “Montoya is at the forefront of the contemporary blues world,” declared Guitar World. “He is one of the truly gifted blues artists of his generation,” said Living Blues. With Can’t Look Back and continued non-stop touring, Coco Montoya is blasting head first into the future, and he’s bringing everyone along for the fiery, blues-rocking ride.