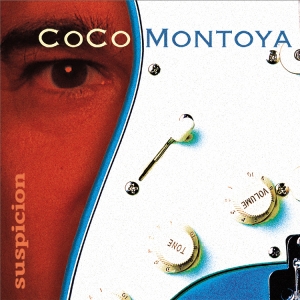 Between his white-hot guitar playing and his masterful vocals, Coco Montoya has talent to burn. In a career that spans almost 30 years, he's gone from drumming as a sideman to singing, playing guitar and leading his own band and headlining major blues festivals all over the world. Montoya earned his spot at the top of the contemporary blues world through years of hard work and constant touring. And it all started with a chance meeting in the mid-1970s with legendary bluesman Albert Collins, who offered Montoya a gig as his drummer for over five years, eventually teaching the youngster blues guitar and becoming Montoya's mentor. Then an opportunity to perform for John Mayall led to Montoya's playing guitar and touring the world for ten years with the legendary Bluesbreakers. Since stepping out as a bandleader in 1993, Montoya released three solo albums and hasn't stopped touring since. As fans' jaws dropped, critics everywhere raved about Montoya's mind-bending guitar licks and impassioned vocals. "The fiery blues that issue forth from Coco Montoya's guitar are awe-inspiring and boogie requiring," shouted The Village Voice. "Montoya's singing is completely commanding," cheered Blues Revue. Now, with Suspicion, his debut for Alligator Records, Montoya releases his most powerful record yet.

On Suspicion, Montoya uses blues as a blasting off point for his rock solid, groove-laden, hip shaking music. With his icy hot guitar playing and his soulful, unaffected vocals, Montoya propels each of the 12 songs with deep feeling and ferocious energy. Produced by Jim Gaines (Luther Allison, Santana, Stevie Ray Vaughan), the twelve songs on Suspicion (including three Montoya originals) burn from start to finish. From the blistering performance of “Don't Take It Personally” to the grooves and passion of “Enough Is Enough” to the toe-tapping, ear-catching “Casting My Spell” to the reinvention of Albert Collins' “Get Your Business Straight,” Montoya brings all the unbridled force of his acclaimed live shows into the studio for a foot-stomping, guitar-fueled ride.

Born in Santa Monica, California in 1951 and raised by working class parents with a large record collection, Coco Montoya's interest in music began early. He enjoyed picking out notes on the guitar, but grew up playing drums in local rock bands. In 1969, Montoya saw Albert King opening up a Creedence Clearwater Revival/Iron Butterfly concert and was transformed. "After Albert got done playing," says Montoya, "My life was changed. When he played, the music went right into my soul. It grabbed me so emotionally that I had tears welling up in my eyes. Nothing had ever affected me to this level. He showed me what music and guitar playing were all about. I knew that was what I wanted to do."

A few months later, Albert desperately needed a drummer for a tour of the Northwest and he called Coco. "When he called," recalls Coco, "I figured we'd rehearse for a few weeks before the tour. Instead, he told me he'd pick me up in three hours." During the tour, Albert took Montoya under his wing, teaching him about the blues. After the tour ended, Montoya remained in Collins' band for five more years. It was during this time that Coco began doubling on guitar. And Collins went out of his way to teach the youngster. "We'd sit in hotel rooms for hours and play guitar," remembers Montoya. "He'd play that beautiful rhythm of his and just have me play along. He was always saying, 'Don't think about it, just feel it.' He taught me to tap into an inner strength. What a great gift he gave me." As Montoya's guitar playing improved, his relationship with Collins kept growing. "He was like a father to me," says Coco, who often crashed at Collins' house. When Collins declared Montoya his "son," it was the highest praise and affection he could offer. In return, Montoya learned everything he could from the legendary Master of the Telecaster.

As disco began to take over and gigs began to dry up, Montoya left Collins' band, but the two stayed very close friends. Montoya worked as a bartender, figuring his career as a musician was over. But luck was still on his side. He kept playing guitar ("I had plenty of time on my hands," Montoya recalls) and eventually others took note of his prowess. One night in the early 1980s, Montoya was jamming in a Los Angeles bar when John Mayall walked in. As a quick tribute, Montoya launched into “All Your Love I Miss Loving.” Impressed, Mayall left the club with a soundboard tape. When Mayall needed a guitarist for the newly reformed Bluesbreakers, he called Coco Montoya. Filling the shoes of previous Bluesbreaker guitarists Eric Clapton, Peter Green and Mick Taylor would not be easy, but Montoya knew he could not pass up the opportunity to play with another blues legend. He joined the band, determined to become an even greater guitarist. For the next ten years he toured the world and recorded with Mayall, soaking up everything he could. Along with fellow Bluesbreaker guitarist Walter Trout, Montoya was a featured member of the band, and often opened shows with his own blistering blues. And like the great guitarists who came before him in the Bluesbreakers, Montoya's emergence as a scalding hot player with chops to burn suggested big things to come.

By the early 1990s, Montoya was at another crossroads. He had been with the Bluesbreakers for ten years and felt ready for a change. His friend Albert Collins had been diagnosed with cancer, and during one visit, Collins told him to move on and do his own thing. Montoya talked to Mayall, who understood the time was right. "Both Albert and John pushed me out of the nest nice and easy," says Coco. Although he was nervous about the move, Montoya put a band together and hit the road, proving himself night after night. His debut as a leader, 1995's Gotta Mind To Travel (originally on Silvertone Records in England and later issued on Blind Pig Records), became an instant favorite with blues fans, radio programmers and critics. The album introduced Montoya as a bandleader who immediately ranked among the best players on the contemporary blues scene. Montoya made two appearances on The House Of Blues Radio Hour and was featured in Guitar Player, Guitar, Billboard, the Associated Press and many other national and regional publications. In 1996, he was nominated for four W.C. Handy Awards and walked away with the award for Best New Blues Artist.

Montoya's follow-up, 1996's Ya Think I'd Know Better (Blind Pig), showcased a feral blues rocker with vocal skills matched only by his ferocious guitar playing. The album stayed on the Billboard Blues Chart for 14 weeks, reaching the number 10 position. The Washington Post called the CD, "One of the year's strongest blues/rock albums." "He's a monster lead guitarist," raved The Atlanta Journal. "His blues rock with a passion." 1997's Just Let Go (Blind Pig) continued to highlight Montoya's steely guitar licks and intense vocals, earning him legions of new fans everywhere he played. "Superb guitar artistry and powerful vocals," said The Philadelphia Daily News. "He sings and plays with passionate abandon," added the Boston Globe
.
Averaging over 200 tour dates a year, Montoya packs clubs and theaters around the world. He has played major festivals, including the New Orleans Jazz & Heritage Festival, The Chicago Blues Festival, The San Francisco Blues Festival and Canada's International Jazz Festival. It's no coincidence that publications from The Philadelphia Daily News to Blues Access to Living Blues to The Village Voice all rank Coco among the best guitarists and singers on the blues scene. "Montoya is at the forefront of the contemporary blues world," declared Guitar World. With Suspicionand continued non-stop touring, Coco Montoya will be there for a long time to come.