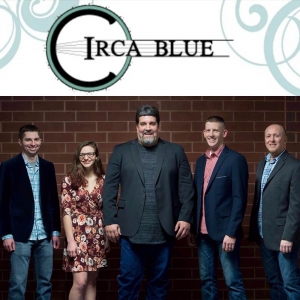 WEBSITE: www.circa-blue.com
BIO:
From the rich musical culture of Martinsburg, West Virginia, Bell Buckle Recording artists, Circa Blue is a dynamic chart-topping bluegrass band that is no stranger to the stages of festivals and auditoriums throughout the United States.
Their music includes original tunes written by and arranged by Steve Harris, but also includes a list of award-winning songwriters that flow with rich lyrics and tuneful melodies. Furthermore, Circa Blue makes every song fit like a familiar old shoe in the studio by performing each tune effortlessly, adding rich instrumental riffs and smooth vocal harmonies.
Their audiences love them and the band continues to hold a strong following of fans. Circa Blue is known for their creative-dynamic arrangements, clean instrumentation, and tight vocal harmonies, they perform a mix of original and cover material that bridges the musical boundaries.
5 critically acclaimed albums to their credit, charting all with the exception of their first self-titled debut.

“A Darker Blue” -#38 out of the top 100 albums for 2016~Roots Music Charts. It was on the worldwide radio charts for 11 months straight with multiple songs AND album charting.
“Once Upon a Time” (Orange Blossom Record Label) - The title cut “Once Upon a Time”, written by Steve Harris, charted multiple times on Bluegrass Today Radio Charts as high as #11.
“Bells of Home” (NMS )- In 2016 we were chosen as the National Artist to record National Media Services' annual Christmas album. For ten years running, they chose a national artist to record a Christmas CD and released it each year at IBMA.
The title cut “Bells of Home” charted multiple years as high as #8 on Bluegrass Today Radio Charts, and won “The Presidents Award” from Strictly Country Magazine.
The instrumental, “God Rest Ye Merry Gentlemen” charted in the top 20.
“Footprints in a Song” (Bell Buckle Record Label)- Current release (2019) and has charted multiple times, and is receiving substantial airplay.
Steve Harris released a solo Gospel Album in 2015, “Sundown” that continues to receive radio airplay.
4
What's This
Advertisement