Chris Cain - Somewhere Along The Way 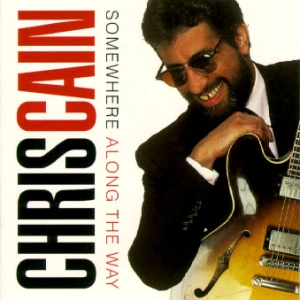 Chris Cain's jazz-tinged, blues-soaked guitar, and deep, warm vocals have the maturity and authenticity of bluesmen many years his senior. His expressive style is the result of a lifetime of study and the relentless pursuit of music mastery. His passion and intensity are a blend of his mother's Greek ancestry and his father's soulful black heritage.

Cain was raised on stories of his father's childhood upbringing on Memphis' historic Beale Street. As a child, Chris was taken by his parents to concerts by B.B. King, Ray Charles, Johnny Otis, Fats Domino, and Freddie King - often viewed from atop his father's shoulders. He began teaching himself to play guitar at the age of eight in a home where blues music played continuously. Cain recalls, "I can remember when I was a kid, my dad would be mowing the lawn with the stereo blasting Muddy Waters on 10. When I look back - that was pretty cool!"

The gifted and soulful San Jose, California native has been performing as a professional musician since he was fifteen. Chris studied music at San Jose City College, and was soon teaching jazz improvisation on campus. Over the next twenty years, Cain would also master piano, bass guitar, clarinet, alto and tenor saxophone. The combination of his blues upbringing and his jazz studies melded to form the searing guitar style that sets Chris Cain apart, and has moved him to the top ranks of the blues music scene.

His most recent Blind Pig release, Somewhere Along the Way, demonstrates anew Cain's immense musical talents. Larry Nager (syndicated Scripts-Howard music critic) writes, "With a voice that recalls B.B. King and a thick toned Gibson guitar sound reminiscent of Albert King, Cain is forging a unique style. With his own highly personalized songwriting, Somewhere Along The Way is a giant step in the development of one of the most compelling young bluesmen on today's scene."

Through his guitar mastery and remarkable creativity as a songwriter, Cain has carved a sound that's unmistakably his own. As San Jose Mercury News music critic John Orr writes, "Chris Cain, more than anyone else, anywhere, represents the future of the blues."
18
What's This
Advertisement