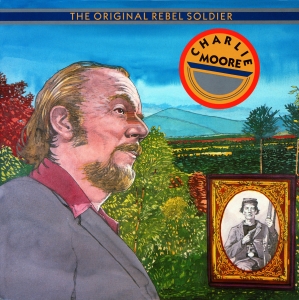 Charlie Moore’s soulful voice had a friendly, comfortable quality that was as versatile as it was strong; in his twenty-year recording career, he recorded everything from old English ballads to current Nashville “hits”. Yet, at the time this album was made in the fall of 1971, Charlie’s recordings had often been somewhat casual and haphazard, subject to whatever musicians might be available that day, and what the label owner might have in mind for him to record.

This album was a marked improvement in several ways - there was nothing here to catch the ear of the passing tourist, just solid, hard-driving bluegrass all the way. Butch Robins, a powerfully fluent picker, was Charlie’s regular banjo picker back then, and Charlie’s longtime sidekick Henry Dockery gave the proceedings a sinewy fullness on bass. The legendary fiddler Chubby Wise was in the middle of a long and illustrious career in both bluegrass and country music - never has he sounded more wonderfully bluesy, more eloquent, or more drenched in the music he was playing. Most of the songs are familiar, but not overdone, standards, but there are a pair of newer gems: “The Best Female Actress of the Year” lifted from an obscure Red Smiley single, and, of course, “The Rebel Soldier”. “The Rebel Soldier” began life across the waters as "The Legend of the Irish Rebel”. Mac Wiseman Americanized it in a mid-1960s country recording and Charlie Moore finally put all the components together in the original classic bluegrass version heard here. Charlie Moore recorded many albums for a number of labels and toured extensively until his death in 1979 at the age of 44.