Charles Brown - One More For The Road 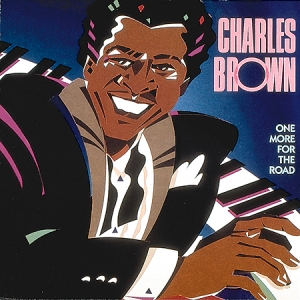 “Driftin' Blues,” “Black Night,” “Merry Christmas Baby” - these are but a few of Charles Brown's recordings that topped the R&B charts in the late 1940s and early 1950s. Charles Brown's mellow, sophisticated brand of blues was tailor-made for postwar Los Angeles nightclub audiences, who found it a refreshing contrast to the aggressive blues shouters and acoustic guitar pickers who had dominated the blues scene. And the national audience caught on, too; in the course of just a couple of years Charles Brown became a national R&B superstar. His new, urbane approach to the blues was tremendously popular and extremely influential. Brown's style left a lasting impression on other legendary performers. He was a crucial influence on three of the greats of R&B: Ray Charles (whose early piano trios were attempts to imitate the Brown sound); Bobby "Blue" Bland (who had a huge hit with his version of “Driftin' Blues”) and Sam Cooke (whose “Bring It On Home To Me” is based on a Brown composition, “I Want To Go Home”).

Charles Brown was born in Texas City, Texas in 1922 and began studying classical piano at the age of ten. After hearing jazz great Art Tatum, Charles committed himself to jazz and blues. Tatum, Brown explained, was the was the first piano player he had heard combine the breadth and dynamics of classical music with the blues and jazz that were part of Brown's childhood in Texas. Most importantly, Tatum brought sophistication to the blues that Charles could relate to his own musical and personal sensibilities.

After graduating from college with a degree in chemistry, Brown worked as a chemist and high school teacher. Moving to Los Angeles in 1944, he was hired by guitarist Johnny Moore, whose brother Oscar Moore was the innovative guitarist in the Nat "King" Cole Trio. Johnny was forming his own trio, The Three Blazers. The group, like the "King" Cole Trio, epitomized the cool, relaxed West Coast piano trio style but brought to the sound a melancholy blues quality that was distant from Cole's swinging arrangements.

The Three Blazers' hit recording of Brown's “Driftin' Blues” was the first record in years to knock Louis Jordan from the top of the R&B charts. The Three Blazers with Charles Brown became one of the most recorded R&B groups in the country, scoring hits with “Merry Christmas Baby” and “Sunny Road,” classics of the West Coast club blues style. The dapper, soft-spoken and handsome Charles Brown became an R&B star. But fame in the R&B world was a double-edged sword for Charles; he scored hit after hit but rarely had the opportunity to display the full range of his musical abilities.

In 1948, Charles left the Blazers. He immediately began recording under his own name, cutting another series of hits including “Please Come Home For Christmas,” “Find Yourself Another Fool,” “Trouble Blues,” “Black Night,” “My Baby's Gone,” “I'll Always Be In Love With You” and “Hard Times.” All told, he recorded nine top ten R&B hits in a period of six years. During the 1950s, Charles continued to be a top attraction on the R&B circuit, headlining national tours with artists like Fats Domino, Bill Doggett, Roy Brown and Amos Milburn.

The decline of traditional R&B during the early years of rock'n'roll brought Charles' tenure as a popular artist to an end. Even though his talents were much broader than those of the majority of R&B artists, Charles never crossed over like his peers Ray Charles or Nat "King" Cole, and he continued to perform as a club artist for his loyal fans.

The 1960s and '70s saw several major blues revivals, but none of them quite caught up with Charles. The harder electric sounds of Chicago and Texas caught on with the rock fans, while rough-edged Delta sounds caught the attention of the folk music market. While the jazz crowd found Charles too bluesy, the blues fans thought he was too urbane and not "authentic" enough. He continued to record until the mid '70s, but his sales were small. The 1980s finally brought Charles a new generation of listeners, awakened to his music by the appearance of several reissues on the Swedish Route 66 label and most notably by Charles' appearances at Tramps, a New York nightclub. The gigs, with Billy Butler (of Honky Tonk fame) on guitar, earned a new round of press attention for Charles, including a feature in The New York Times.

In 1986, Charles into the studio with a handpicked New York band featuring Butler. In two sessions, they cut an album for the Blue Side label entitled One More For The Road that won overwhelming critical response and revitalized Charles Brown's career. He played the San Francisco Blues Festival, the Chicago Blues Festival, the Long Beach Blues festival and a series of club dates, and began to find a whole new audience. Unfortunately, Blue Side and its sister label Up Side didn't survive the struggle that independent labels face, and they folded in mid-1988.

Ironically, in December of 1988, Charles Brown received his biggest media exposure in years. He was featured, along with Ruth Brown (no relation) on the nationally aired PBS special That Rhythm…Those Blues. The show featured Charles in a recent club performance, plus loads of interview footage, still photos from his younger years, and a duet with Ruth.

Alligator reissued One More For The Road in 1989 with two new cuts rescued from "the can," created new packaging and re-mastered the album. It was a departure for Alligator, best known for its "Genuine Houserockin' Music," but label president Bruce Iglauer thought it was "time that our fans got turned on to a slightly different kind of blues."

Brown spent much of his time touring and recording. His career received a boost in the early 1990s when his management was assumed by guitarist Danny Caron, and Bonnie Raitt started singing his praises. He began touring as Bonnie's opening act, and that brought him to a new market. In 1997 he was inducted into the Blues Foundation's Blues Hall of Fame.