Tommy Castro And The Painkillers - The Devil You Know + 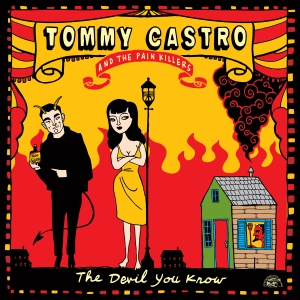 “I’m always moving forward, going outside of my wheelhouse, listening to new music and incorporating new ideas,” says award-winning guitarist/vocalist/songwriter Tommy Castro. “The contemporary blues scene is full of fresh, new sounds. It’s an exciting time.” Castro is famed for his signature brand of tough, rocking rhythm and blues, thrilling fans around the world with his incendiary live performances. With his turbo-charged Alligator Records album, The Devil You Know, Castro strips his music down to its raw essence as he rockets into the next phase of his storied career.

The Devil You Know, recorded in the Bay Area with his fiery new band The Painkillers and produced by Castro and Bonnie Hayes, is a contemporary blues tour-de-force. The album is an untamed, high-energy set of 13 songs, including nine written or co-written by Castro. “For the new album I challenged myself to add different sounds and new rhythms to my style while remaining true to my roots. I wrote using ideas for songs and ideas for sounds together in a way I’d never done before,” explains Castro, “using drum rhythms to drive the lyrics.” The tracks—melodic and biting, energetic and fun—are brought to life with sonic authority by bassist Randy McDonald (from the original Tommy Castro Band), keyboardist James Pace and original Painkillers drummer Byron Cage.


In addition, many of Castro's friends and admirers, including Alligator label-mates Marcia Ball and The Holmes Brothers, add their talents to the proceedings. Other guests include guitarists Joe Bonamassa and Mark Karan, guitarist/vocalist Tab Benoit, vocalists Samantha Fish and Tasha Taylor and harmonica player Magic Dick. Each song comes loaded with emotional depth and muscular hooks courtesy of Castro's soulful singing, insightful lyrics and dynamic, potent guitar playing. With The Devil You Know, Castro—The Painkillers blazing behind him—unleashes an instant classic. According to Blurt, “Castro is one of the greatest blues guitarists, songwriters and entertainers in the world today.”

After years of playing guitar-driven blues and R&B backed by a tight horn section, Castro introduced The Painkillers live in 2012, creating a lean, mean four-piece lineup, with the drum chair now held by David Tucker. Fueled by Tommy’s voice and guitar plus bass, drums and keyboards, the band released the 45rpm single Greedy / That's All I Got later that year (both songs are included as bonus tracks on the new CD). “Greedy” quickly became one of Castro’s most-requested songs. An attention-grabbing video for Greedy has already received over 200,000 views on YouTube. The Chicago Sun-Times calls his music “fiery and soul-drenched.”

Castro views the harder-edged sound of The Painkillers as a natural extension of the music he’s been making since he was a teenager. “The Painkillers really get me back to my roots. It feels to me a lot more like it did when I first started playing with my friends as a kid. Bands were always just three or four guys playing for the fun of it,” Castro recalls. Now, Tommy Castro And The Painkillers are pushing the music to another level.

Tommy Castro And The Painkillers are having a great time bringing The Devil You Know to life on stage night after night, personally connecting with their fans all over the world. “A lot of folks are having hard times these days,” Castro says, “and they need something to lift them up and make them smile. Our music kills the pain.” With The Devil You Know, Castro, along with The Painkillers, are unquestionably easing pain, lifting spirits and filling dance floors the same way he’s been doing for decades—only now he’s packing an even more feral punch.

BIOGRAPHY
Born in San Jose, California in 1955, Tommy Castro first picked up a guitar at age 10. He came under the spell of Eric Clapton, Elvin Bishop, Mike Bloomfield and other blues rock players early on. As he got older, Castro moved forward by investigating the past, falling in love with the blues guitar work of Muddy Waters, B.B. King, Freddie King, Buddy Guy, Elmore James and singers like Ray Charles, Wilson Pickett and James Brown. By his late 20s he was playing in a variety of San Francisco-area blues and soul bands.

Castro joined Warner Brothers artists The Dynatones in the late 1980s. The much-loved band had a huge fan base and toured the U.S. constantly. He honed his chops with the group on the road for two years, performing live all across the country and sharing stages with major artists like Carla Thomas and Albert King. He formed The Tommy Castro Band in 1991 and won the Bay Area Music Award for Best Club Band in both 1993 and 1994. With his local fan base quickly expanding, he released his debut album in 1996 on Blind Pig. The album won the 1997 Bay Area Music Award for Outstanding Blues Album, and Castro also took the award for Outstanding Blues Musician that same year. He began touring nationally, picking up new fans everywhere he went.

In the mid-1990s The Tommy Castro Band served as the house band for three seasons on NBC Television’s Comedy Showcase (airing right after Saturday Night Live), bringing him in front of millions of viewers every week. During the 1990s and into the 2000s, Castro released a series of critically acclaimed CDs for Blind Pig, Telarc and 33rd Street Records as well as one on his own Heart And Soul label, and began years of year-round, relentless touring, continuing to this day. In 2001 and 2002 the legendary B.B. King asked Castro to open his summer concert tours. Castro received an open invitation to join the King Of The Blues on stage for the nightly finale.

Castro’s 2009 Alligator debut, Hard Believer, was anchored by his inspired vocal delivery, masterful horn arrangements and expert guitar work. On the strength of the album and subsequent touring, Castro won four 2010 Blues Music Awards including, for the second time in his career, the coveted B.B. King Entertainer Of The Year Award (the very highest award a blues performer can receive). His song “Hard Believer” (co-written with Bonnie Hayes, who co-produced he Devil You Know), took first place in the blues category of the 2012 International Songwriting Competition.

In 2011, Castro released Tommy Castro Presents The Legendary Rhythm and Blues Revue Live on Alligator. The album is a fiery collection of the highest highlights from a series of live performances anchored by Castro and an all-star collection of nationally recognized blues musicians. In addition to Castro's stellar fretwork and blue-eyed soul vocals, the album features Alligator Records label-mates Joe Louis Walker, Rick Estrin, Janiva Magness and the late Michael “Iron Man” Burks, along with Debbie Davies, Theodis Ealey, Sista Monica and Trampled Under Foot.

With his next release, 2014’s The Devil You Know, Castro stripped his music down to its raw essence. The album is an untamed, high-energy set of 13 songs, including nine written or co-written by Castro. The tracks—melodic and biting, energetic and fun—are brought to life with sonic authority by the band. In addition, many of Castro’s friends and admirers, including Marcia Ball, The Holmes Brothers, Joe Bonamassa, Tab Benoit, Samantha Fish, Tasha Taylor, and Magic Dick add their talents. The album received a 2014 Blues Blast Music Award for Rock Blues Album Of The Year.

Since the release of The Devil You Know, Tommy Castro And The Painkillers have toured non-stop, playing hundreds of dates at clubs, festivals and concert halls all over the United States, Canada and Europe. The band is currently hard at work on their next album, set for release in late 2015.

THE PAINKILLERS ARE:
RANDY McDONALD Randy McDonald was born in Harrisburg, PA in 1959 and grew up in San Diego. He learned bass at an early age, becoming a first call, in-demand musician by his late teens. McDonald’s influences range from straight-ahead jazz to hard rock, blues, and soul music. When he joined The Dynatones—the nationally touring, six-piece blue-eyed soul band—in 1983, it was a perfect fit. During his tenure with the group, McDonald befriended Dynatones guitarist Tommy Castro. Not long after leaving the band in 1991, McDonald got a call from Castro, who was putting together the first incarnation of The Tommy Castro Band. McDonald appears on seven Castro albums and has toured the world with Tommy, helping the band to become one of the most celebrated roots music groups performing anywhere. McDonald left the group in 2007 before returning to join The Painkillers in 2012. “Randy has been with me from the beginning as a major contributor to the music we were playing,” recalls Castro. “Randy was a big part of the Tommy Castro sound. It’s great to have him back.”

JAMES PACE
James Pace was born in Roanoke, VA in 1978. He began playing piano by ear at age three. A proficient pianist, he fell in love with the Hammond B3 organ at age 22, touring with the jam band Rebus before playing with Blind Pig recording artist Harper. In 2008, Pace joined blues guitarist Ana Popovic’s band, and spent three years performing with her around the world. He has played on over 30 albums and has shared stages with B.B. King, Buddy Guy, Robert Cray, Los Lobos and Janiva Magness. Pace is thrilled to be playing with Tommy. “I am blessed to play the music I love with incredible friends,” he says, “for the greatest fans on earth.”

BOWEN BROWN
Bowen Brown was born in Palo Alto, CA in 1958. He started playing drums at age 9 after getting turned on to Jimi Hendrix and Cream. He began working in bands at the age of 15. For many years Bowen played clubs around Northern California, as well some in New York City. In 1988 Bowen began a six year stint with the legendary John Lee Hooker, touring the globe, recording, and sharing the stage with many other great blues and rock artists. Since leaving Hooker's band Bowen has worked with a variety of artists including Mark Hummel, Little Charlie Baty, Maria Muldaur, Dan Hicks, Chuck Prophet, Stompy Jones and many more. It was during his years with Hooker that Bowen met Tommy and Randy. “The San Francisco blues scene in the early 90's was pretty hot, and Tommy's band was at the top….absolutely on fire! I really dug what they were doing back then, and I am really honored to be a part of this band now!”