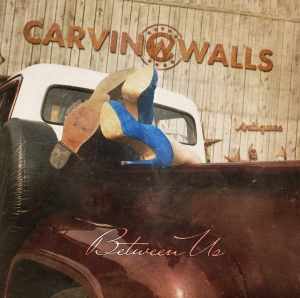 Carvin Walls is a married country duo based out of Nashville, TN! Kelly (formally Carvin) Walls and Troy Walls are a powerhouse duo that could only be created in the heart of Music City! Kelly, a sassy, fun Jersey girl who played professionally in the NJ tri-state area as a pop/rock, hippie singer/songwriter, and Troy Walls, a down to earth country boy from West Virginia who was playing the Ohio river valley while making regular trips to Nashville for songwriting, both officially made the move to Nashville, TN in 2012. Shortly after, they met at a songwriters round and started writing together! The magic between them happened instantly! They began to play songwriter rounds together, and soon officially became the duo everyone was talking about! For the past 2 years they have been working diligently on their debut album “Between Us” that was released early 2019.

What is so special about this country duo? They are vastly different from each other and somehow, some way, it works! Kelly, raised on rock n’ roll and pop and Troy on traditional country, both loving motown and r&b, combine their styles into an oddly perfect combination! When the two come together as writers, it mixes pop rock and country in a very organic way with a splash of soul, reminiscent of Mo-Town! Their debut album “Between Us” has been reaching fans across the country, with tons of requests and a huge outpour of love and support! It has just the right mix of fresh, fun and real that fans are organically latching onto! Their album debuted at #59 on Itunes Country Album charts and the duo is currently booking a spring and summer tour in the US!

Quotes:
“Their album “Between Us” is one of the best albums that I have listened to in a long time!” - Tammy Bryson (Think Country)

“They are the most requested, easily!” - Donny Ray (WKYR River Country)

“They are the best songwriters I know, and this album has HITS!!” - Ashe Underwood (Hit Songwriter)
0
What's This
Advertisement