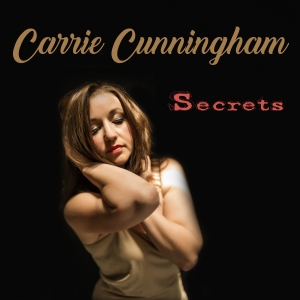 "Musically daring and more interesting than a traditional three-chord country singer, Carrie is not unlike a Modern Day Bobby Gentry." ~ Jim K./ Guitarist for Reba

"Carrie has the amazing voice everyone around town knows, and is a true country pro" ~ Michelle/KUPL Portland.

CARRIE CUNNINGHAM - SECRETS
What to expect from SECRETS:

This was the first of two EP's in 2017. Secrets is more heavily in the Americana blues genre than Let's Dance. Most of the songs are dark and very story telling. You have murder, seduction, loneliness,longing, and revenge. They all have the nice rich sound of a pedal steel, except a few of them make you imagine a mystery movie, while a few others bring you into a hotel or swanky bar.

Whisky Kisses is a song about the touchy subject of Domestic Violence, but I believe in talking about subject matters people try to avoid. I was listening to Patty Loveless and her "Mountain Soul" album, when the song "You'll never leave Harlan Alive" played. The sound was so eery yet so beautiful. It touched a nerve with me and I let the sound take me in a direction I had yet to write.

At first the song started out as a bluegrass song, simply because of the influence and I touched on parts of the song that sounded great, but didn't leave an impression. A publisher in Nashville listened to the initial version and said " If you are going to write about this, you need to go all in", and so I did. I appreciate it when people come up to me and tell me that I wrote their life in the song..

This song has a soulful bluesy feel about missing someone you love. Jim and I call it the B side of our song "Right amount of wrong". I like to say that I was feeling my inner Susan Tedeschi and Bonnie Raitt, when we were writing the music.

This is a fun uptempo Miranda Lambert sounding song about getting revenge on a boyfriend. The girl in the story catches her boyfriend out with another girl and has no luck trying to auction him off! I think my cowriter and I went a little easy on him, lol!

This song is a mid tempo country blues song that is smothered with seduction. It's a song that will make any man blush while a woman's imagination runs wild.

Both my cowriter and I instantly fell in love with this song when we put it all together. It's a dark and mysterious story told by the ghost of a girl! We came up with the idea from the very first scene of “Fried Green Tomatoes”. Everytime someone hears this song, they call me a "Modern day Bobby Gentry". I like the sound of that!

This song comes from a dear friend of mine who we lost due to a very rare form of cancer. He was a wonderful man and I really wanted to pay my respects to him, so I recorded one of his many, many tunes. This song, lyrically, fit the theme of the EP, so I chose it. Both Travis and I have a jazz background and his version is very jazzy, which is why I was drawn to it so much. I like to think I met somewhere in the middle, between jazz and country.

Carrie Cunningham Biography
Carrie Cunningham is an International Chart topping Performing Songwriter who loves to entertain! The music industry is calling her an authentic, sultry, slightly twisted and totally believable voice on the New Country/Americana scene. Carrie has the sass of Miranda Lambert and a powerhouse voice like Martina McBride; all the while, the sweetness that seethes from the rich tones of Pam Tillis; which engages and captivated the audience within minutes.

Carrie started in music like many aspiring artists, by singing in a local band, but all the while she was attending school studying voice and composition, and singing with the Spokane Symphony Chorale.  During the Garth and Shania era, is when she started dabbing in songwriting.  In 2000, she had an acoustic duo, Mirror Image and recorded their first EP in 2001.  In 2003, Carrie went back to school for audio production.  After graduating she focused on live sound and was a live sound engineer along side fronting cover bands and eventually her own.

In 2005, she signed on with an Independent label, Divulge Records, where she released her Honeysweet album, along with releasing a video to her song "Smile Again" in conjunction with the Vanished Children's Alliance.   She was with Divulge until 2011.

Since then, Carrie has released 3 other EP's through her own record label, Sound Barn Records and also started her own Publishing Company, Sound Barn Publishing. The three EP's under Sound Barn Records are  "The Way You Look at Me", "Secrets", and "Let's Dance".  Other Independent artists have cut songs written by Carrie and she has also had movie placements.

Carrie Is currently passionate about spreading the awareness of Domestic Violence and any form of child endangerment.  Carrie has been a volunteer with The Big Brother's, Big Sisters organization, the Lunch Buddy program, and also CASA- Court Appointed Child Advocate

She has opened up for acts like Kacey Musgraves, James Otto, Jake Owen, Crystal Gayle, Brian White, Collective Soul, Diamond Rio, Restlesss Heart, Love and Theft, and many, many others.

From her acoustic to full band performance one thing is guaranteed; the audiences will witness her dedication and enjoyment to the craft of singing and performing.

Some Notable Highlights include:

~ONLY UNSIGNED ARTIST to play back to back performances at the Largest NW Country Music Festival, Watershed 2014-2015

~Signed to Independent Label “Divulge Records”, from 2006-2011
~Collaborated with The Vanished Children's Alliance for the making of the video “Smile Again”