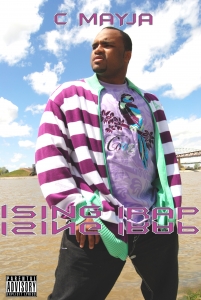 C Mayja is currently a producer/artist who works on music with and without hooks for other artists
“C Mayja” , aka Carlton Earl Little who was born November 14th, 1981, is an artist whose origins begin in Memphis, TN. Due to the influences of his family who were in numerous blues bands and choirs, he grew fond of music. Early on he sang in the school and church choirs. He began playing around on drum sets at age 8 and by 12 he took on the role of bass guitar player for his church and minister of music. He was influenced by fellow Memphians 8ball and MJG as well as 3-6 Mafia. Today he juggles between writing and singing hooks to throwing down a hot 16 bars or so on a track. He produces his own music. He is very creative and versatile and has work ethic that others praise. He has spent the past decade perfecting his craft. He lended his talents to gospel singer and cousin, Courtney Little, and played on a few of his songs on his cd titled “Grateful”. Not the one who likes the spotlight but never the one to shy away from what he has earned, C Mayja decided it was time to put his talents to the test and become a solo artist in 2007. If being an artist isn’t stressful enough, he also has the title of CEO of FACE Inc, the indie record label he started in 2007.After a year of writing and recording, he has put together what he feels is a powerful and entertaining mix of songs that will definitely appeal to the clubs across America. He spends time in Atlanta as well. He says for the southern brand of music there is no place better .It was a move he made after being stripped naked and tied up in his home during a home invasion. “Dj Paul of 3-6 Mafia said it best when he described Memphis as the city where they love to hate”. Basically people could see he was on to something and hate soon followed. “I’m a hustler. I had an Excursion and a Jaguar. Dressed like a million bucks. I was wearing $1000 to $2000 Yoropiko jeans and blazers.” He was actually robbed again by the same group of people .They followed him 5 hours to Atlanta and kidnapped him, took his car and left him naked in Dekalb County. They got some cash ,his Jaguar and $10,000 worth of exclusive clothes. Turned out the guy he bought the car from was behind it. To add insult to it the Dekalb officers assumed it was drug related and did all but try to beat him into saying so. “The guy basically said you are lying. How much drugs did you have?” Sleepless nights followed but time heals everything. “It was a learning experience. I feel better today knowing the car salesman is in jail for drugs and the gunman is in jail for murder. It could have easily been me. That’s when I knew I had to do this music. God gave me a second chance.” He started cage fighting to release his anger and he also lets loose with his music now. He feels that he didn’t walk away from his problem by leaving but instead he sprinted toward the solution. “Memphis will always be home, but the economy is bad so people usually do whatever they can to stay afloat. That’s life in Mtown. I wanna make a living in music and Memphis just is not my outlet”. C Mayja says he is not about the money and fame but he just wants to make music that people can relate to, dance to, knod there head and appreciate”. Only time will tell if he succeeds.
1
What's This
Advertisement