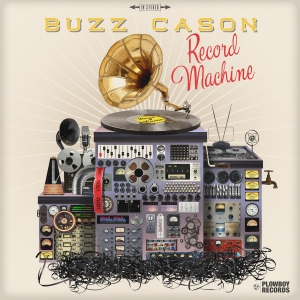 New York, NY-- Rockabilly Hall of Famer Buzz Cason is proudly releasing his new studio album Record Machine on August 21, 2015. This is his second album to be released via Plowboy Records.

Touring the US and the UK was just a small portion of the incredible year Buzz had in 2014. In July, the Country Music Hall of Fame honored him as part of their “Poets & Prophets” series, and Cason’s then recently-released album Troubadour Heart was enjoying chart success and heavy airplay on Americana Radio.

Following this, Buzz hunkered down at his famed Creative Workshop studio with engineer Joe Funderburk to begin pouring his soul into Record Machine.

Buzz Cason notes in the opening title track, which is a love letter to his record player, that he’s “got Rock ‘N’ Roll, R&B, and everything between…on my record machine,” and it shows in the breadth of the songs that follow. Record Machine is an eclectic mix of Americana sounds, dosed with rock, folk, rockabilly, and even a touch of reggae, with his loosened-up remake of George Jones’ “She Thinks I Still Care,” which was originally written by Buzz’s good friend Dickey Lee. The other ten original tracks visit different moods and stories, from the stripped-down acoustic skip of “Don’t Worry Mama” and the whiskey-soaked bar room confessional “Dodgin’ Bullets,” to the lonely ballad “Just My Dreams,” the upbeat bounce of “Follower,” and the rockabilly swing of “Memphis Friday Night” and “Overload.”

The album also features a few cameos by Nashville-based duo Steelism, who are featured on “Record Machine,” “She Thinks I Still Care,” and “Wait On Your Love,” as well as Sugarcane Jane’s Anthony Crawford (“Woe Is Me,” “Just My Dreams”), and Buzz’s son Parker Cason, who co-wrote “Record Machine” and played on several tracks.

“Record Machine is special to me and hopefully it will be a positive experience for the listener,” says Buzz. “The record is a slice of my musical life, incorporating emotions and thoughts of recent times as well as just fun times recorded in the studio. Once again I have the support of extremely talented players and writers on this set of songs… [Guitarist] Anthony Crawford plays a key role in the record as well as the guys from my band contributing on several tracks... As the title cut says: From the first time I heard a needle hit vinyl: ‘I've been in love with music ever since that day!’ ”

And quite the love affair it’s been! With a career six decades rich as a performer, songwriter, and publisher, Buzz Cason has touched upon every facet of the music industry, as well as influenced countless musicians and fans. Coined as “The Father Of Nashville Rock” by Alamo Jones of Sirius XM’s “Outlaw Country,” this Americana/Roots Rock singer-songwriter has created songs that have gone on to live beyond the genre, from the classic “Everlasting Love” (co-written with Mac Gayden), which has been recorded by U2, Gloria Estefan, Robert Knight, and Carl Carlton, and has charted in every decade since its inception, to “Soldier of Love” (co-written with Tony Moon), which has been recorded by The Beatles, Pearl Jam, Marshall Crenshaw, and Arthur Alexander. To this day, Buzz is the only songwriter credited with cuts by The Beatles, Pearl Jam, AND U2.

As a producer, Buzz left his stamp on Jimmy Buffett’s Down To Earth and High Cumberland Jubilee albums (he also co-wrote a few songs), and he even produced Buddy Holly’s former band The Crickets, and toured England with them as their singer. He’s sung back-up for Elvis Presley, Willie Nelson, Kris Kristofferson, John Denver, Kenny Rogers, Roy Orbison, George Jones, and Leon Russell, and was even the voice of Alvin of the Chipmunks!

The music legacy continues on with the release of Record Machine.

Buzz Cason will tour this year in support of Record Machine, with some solo dates, and some shows with his band The Love Notes. Tour dates to be announced soon.