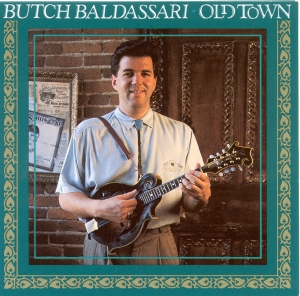 You won't hear any wrong notes from Butch Baldassari! Originally from Scranton, Pennsylvania, Butch grew up listening to people like Frank Sinatra, Louis Prima, and The DiMaria Sisters. In those days, he probably had no idea that he would become one of the most tasteful new mandolin players to emerge onto the 1990's bluegrass scene.

Prior to his first exposure to bluegrass, Butch's focus centered around playing both electric and acoustic guitar. He sites a visit to the 1972 Philadelphia Folk Festival as the turning point for him to take-up the mandolin. But Butch has come a long way since the Seventies! While spending ten and a half years in Las Vegas, Nevada, he met up with three young musicians-forming a new traditionally-oriented bluegrass band, the Weary Hearts. They went on to win the prestigious International Band Competition (1989) held annually in Nashville by the Society for the Preservation of Bluegrass Music in America(SPGMA). Shortly thereafter, Weary Hearts recorded their first nationally-distributed album, By Heart, on Flying Fish Records.

Old Town, Butch's second solo effort, represents a strong collection of original instrumentals produced with a fine sense of arrangement and taste. It also showcases some of the best players in bluegrass / acoustic music today.

Butch is one of my favorite mandolin players, and if you are a fan of the right notes and beautiful tone, I'm sure he'll be one of your favorites too!

Butch Baldassari's mandolin work is featured on recordings by Alison Krauss, Elek Bacsik, David Schnauffer, Nashville Bluegrass Band and others. In addition to Weary Hearts (1986-90), Butch was a member of the bands Lonesome Standard Time (1992-98), The Grass is Greener (1995-97) as well as founding and leading member of the Nashville Mandolin Ensemble. He was an adjunct professor of mandolin at Vanderbilt University's Blair School of Music from 1996 until his untimely death from an inoperable brain tumor in 2009.