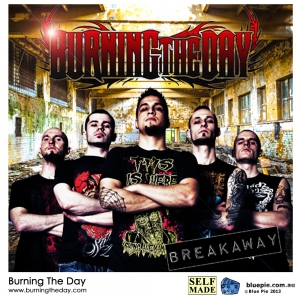 That’s the equivalent to more than 15 thousand fans each calendar month of 2013, a massive achievement for independent bands around the globe!

The metal act has announced the name of their latest full length album, ‘Metamorphosis’. Declaring the first hit single ‘Breakaway’ a success! BTD have assured both their new and old fans that it will not disappoint, describing the album as “TERRIFYINGLY BRUTAL, so get ready for studio video blogs and updates up the **** cause man we can’t wait to get this brutality to you dudes as quickly as possible!”

Burning The Day would like to thank everyone for their recent growth, and will be looking forward to the promotion of their new EP throughout Europe and Canada, with a release and tour date both set in April! The promotion of this album will be supported by independent record labels ‘Blue Pie’ and ‘Self Made’ records UK.

Head to their official Facebook page for all the latest information and updates on their upcoming promotions tour:
www.facebook.com/burningtheday99?fref=ts

The new ‘Burning The Day’ tour and album release is also featured on the official Blue Pie site!
www.bluepierecords.com

You can now download the new single and EP ‘Breakaway’ on iTunes!
www.itunes.apple.com/au/album/breakaway-ep-european-tour/id601744540


< Go Back
4
What's This
Advertisement