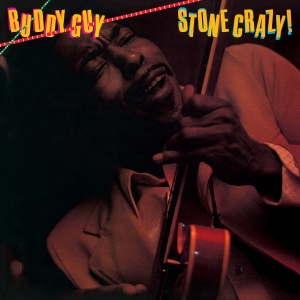 After decades of paying dues, Buddy Guy has emerged as the most heralded bluesman of his generation, a hugely influential guitarist and passionate, dynamic live performer. But Buddy started as a sideman, and toiled in the Chicago clubs for a decade before beginning his march to worldwide fame.

Buddy began as a sideman in Baton Rouge, playing primarily with the late Raful Neal (father of bluesman Kenny Neal and an excellent bluesman in his own right). Seeking a record deal, Buddy came to Chicago in 1957 at the age of 21. He was “adopted” by Muddy Waters, who encouraged the young bluesman when gigs weren’t immediately forthcoming. Buddy’s first step forward was winning a legendary guitar contest at the Blue Flame on the South Side, when his combination of great playing and showmanship (his 100-foot guitar cord allowing him to wander through the audience and down the street).

He quickly won a local reputation for his wild live shows, in the style of his first big influence, Guitar Slim. Later Buddy absorbed the smoother sounds of B.B. King, but Buddy’s tortured, high-pitched, gospel-influenced vocal style put him in a different category; he simply couldn’t (and wouldn’t) control the frenzy of his music.

He found his first recording contract with Eli Toscano’s Artistic label (Eli also owned the Cobra label, which broke Magic Sam and Otis Rush as major league blues stars in the 1950s). His two singles for Artistic were produced by Willie Dixon, but they failed to dent the charts. When Cobra folded, Buddy was signed by Chess where he continued his association with Dixon. His Chess singles like “The First Time I Met The Blues,” “Let Me Love You, Baby,” “My Time After Awhile” and “Stone Crazy” are now considered classics that first exhibited Buddy’s mature style, with his stuttering guitar work and on-the-edge singing. But again, Buddy didn’t receive the R&B radio play of his contemporaries, and he continued to work the South Side clubs as well as doing session work for Chess with Muddy Waters, Koko Taylor and others.

When the folk music boom of the 1960s began turning its attention to electric blues, Buddy finally found his audience. Pairing with his friend, harpist Junior Wells (with whom he had played for many years at Theresa’s Lounge), he recorded first on Junior’s classic Hoodoo Man Blues album on Delmark and then on Vanguard’s Chicago/The Blues/Today series, which was one of the first blues recordings aimed at the young folk audience. Buddy won a contract with Vanguard, cutting his famed A Man And The Blues album. He hit the road, appearing with both Junior and on his own, electrifying folk and rock venues and touring the U.S., Europe and Africa (including a tour with the Rolling Stones). Eric Clapton named Buddy as his favorite guitarist.

But even with all this fame and hundreds of live shows, Buddy couldn’t secure a major label contract during the ‘70s and ‘80s. He recorded extensively for English and European labels, both in the studio and live. His brilliant electric and acoustic (with Junior Wells) albums for the French Isabel label were issued in the U.S. by Alligator under the titles Stone Crazy! and Alone & Acoustic.

Finally, in the 1990s, Buddy got the break he was looking for. He was signed to the Silvertone label (distributed by the multinational BMG) and his fans Eric Clapton and Jeff Beck joined him for his Damn Right I’ve Got The Blues CD. The album along with the accompanying video launched Buddy as a headliner, playing not only blues festivals but also major rock venues. He hasn’t looked back since then, cutting album after album of passionate, hard-edged blues and rock tunes, often with guest appearances by rockers. More recently, he’s recorded stripped-down CDs that have taken him back to his Deep South roots.

When not on the road, Buddy spends most of his time at his famous Buddy Guy’s Legends club, easily the top blues spot in Chicago, if not the world.
16
What's This
Advertisement