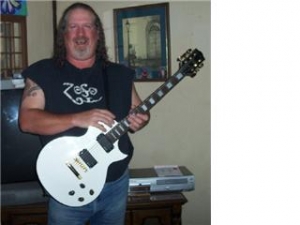 Solo artist Bryan Therlin has been writing and performing for a number of years and has released his first cd earlier this year entitled--"Simple Songs For Complex Moments".
The album is a mixture of Classic Rock, Rock, Blues and Folk Rock covering the many influences Bryan soaked up as a teen during the 70's.
The songs from the cd have been getting airplay on internet radio stations www.aiiradio.net and awesomeradio.net regularly. Some acoustic gigs have been performed this year as well and the songs have been well received.
After The Rain, as a matter of fact was accepted to be a part of The Hometown Heroes of Omaha Charity compilation cd, which is still being put together.
From this very active year, a new batch of songs have been written for the next cd to be recorded. The new songs seem to have been forged from a period of personal and intense tribulations and may be his most introspective lyrics to date.
The song After The Rain is now sitting at # 3 currently on the AiiRadio.net Top 40 Chart. It debuted at #3 on Wednesday December 17th......and Hopefully it will reach the #1 spot shortly.
After The Rain moved up to # 2 on 12/24/08 and hung in a #2 on 12/31/08 on the Aiiradio.net Top 40 Chart Show.
After The Rain, as of this date 1/21/09 has now been at #1 for 3 weeks on the aiiradio.net Top 40 Charts.
After The Rain has spent 4 weeks at #1 on the Aiiradio.net Top 40 Charts. This song has now been moved to the Aiiradio.net Chart Hall of Fame for pending 4 consecutive weeks at #1.
Bryan now has a brand new song on his myspace page. It is called Cry You A Song and explores a new dimension and direction for him as an artist. Check out the new tune at http://www.myspace.com/bryantherlin and add him as a friend.