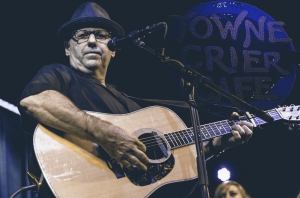 After years spent “lost in the wilderness” of music and commerce (i.e. building and running a music venue in Larchmont, NY), Bruce T. Carroll has returned to his roots and his first and abiding love: lyric songwriting. With the release of his first album Ruckus and Romance, Bruce has forged a new career as a singer-songwriter using irony and imagery as tools in trade....
John Platt, the dean of Americana, folk, and roots music at WFUV radio, and the host of the long-running “Sunday Supper” show on which Bruce has been featured, has called Ruckus and Romance a “very accomplished album, attuned to the zeitgeist of the moment”.

“This album was a long time in the making and involved the efforts of a great many musician friends. From the extraordinary musicianship of Clifford Carter, David Spinozza, Marc Shulman, Sara Milonovich, Tracy Grammer, Lincoln Schleiffer, Joe Bonadio, and Nicole Alifante, to the aid and counsel of co-producer Al Hemberger, this collection of eight songs touches all the styistic bases and, I hope, reaches many people on many levels...Thanks for listening!”
Bruce T. Carroll
www.brucetcarroll.com
3
What's This
Advertisement