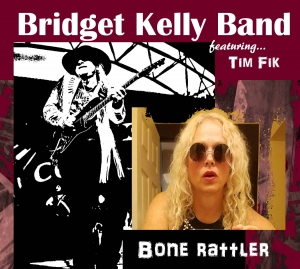 Bridget Kelly Band "Outta the Blues" (2016)
The Bridget Kelly Band's "Outta the Blues" CD was released on Alpha Sun records in May, 2016. The album rose to #11 on the RMR Contemporary Blues Album chart, and was #1 on the RMR "Electric Blues" Album chart for six weeks in July and August of 2016, with a #1 RMR Blues single (1 week), "Someone's Hoodooin' Me". Tracks from the CD were played on hundreds of blues radio shows around the world.

Copies of the CD and/or a dropbox.com link to tracks from the CD (hi-rez MP3s @320kbps) please send your physical mailing address and/or e-mail address to timfik@hotmail.com.

A BIG THANK YOU to all the DJs spinning tracks from this CD. We appreciate your kind words and your support.

Bridget Kelly Band "Forever in Blues" (2014)
Bridget Kelly Band's "Forever in Blues" CD was released in June of 2014. This all original music CD was well-received by reviewers and DJs alike, and several tracks gained regular airplay on Sirius XM radio, B.B. King's Bluesville: "Texas Toast" and "Everyday Without You". The band gained international recognition in 2015 and 2016 as Semi-Finalists in the International Blues Challenge (IBC) and was voted as the #3 band in a Women in Music poll conducted by Blues E-Music Magazine in July 2015. To obtain a copy of this CD contact Tim Fik: timfik@hotmail.com.