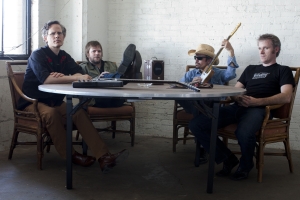 "If Uncle Tupelo is the Beatles of the alt-country movement, the Bottle Rockets are certainly the Rolling Stones. Featuring a brash, in-your-face sound with as much of a Lynyrd Skynyrd influence as Gram Parsons." —Spartanburg Herald-Journal

"The current lineup has been together for three and a half years, and has turned into one of the tightest configurations of rock musicians working today. With Henneman and John Horton trading powerhouse lead lines and crunchy, country-inflected licks, the guitars have locked into some sort of mind-meld. If you're not watching their hands, you can't always tell which one of them is sending those chills up your spine." —No Depression

The simple fact is that the Rockets have been making some of the most incisive, hip and eclectic American music on the scene for over a decade now. Long known amongst folks with good taste, the Bottle Rockets have spent their career raising dust and raising lighters with their spot on and literate anthems of the ordinary Joe. They are equally adept at long hair rockers from the rural route, gut-bucket boogies that’d make ZZ Top hang their heads in fraudulent, washed-up shame, or remarkably poetic elegies of loss and displacment.

"Back before the Drive-By Truckers got it in gear, when Ryan Adams was still settling in Whiskeytown, the Bottle Rockets were setting off musical M-80s as perhaps the most underappreciated roots-rock/Americana band of the mid-'90s... this current edition of the Bottle Rockets is both musically and thematically, a great American rock band." —Reuters/Hollywood Reporter
21
What's This
Advertisement