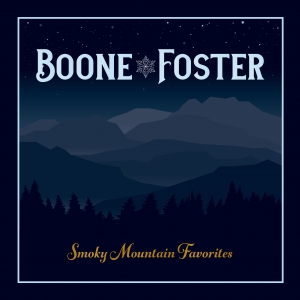 WILLIS, VA - Mountain Fever Records is pleased to welcome a fresh combination to the bluegrass music family. Boone & Foster is comprised of Troy Boone on Mandolin and vocals and Aaron "Frosty" Foster on guitar. Joining them for a great recorded project is Aaron Ramsey on bass, Daniel Greeson with tenor vocals and fiddle and Brady Wallen on banjo. They are recording their most requested tunes which will be known as Smokey Mountain Favorites, and "County Fool" is the first single, releasing June 19th Worldwide.

Aaron “Frosty” Foster-
Aaron “Frosty” Foster, is a 27-year-old graduate of East Tennessee State University.
Foster has always been interested in bluegrass music. He spent much of his youth traveling to and from bluegrass festivals in New England and was only ten years old when he asked for a guitar for Christmas. His grandparents, George, and Etta Crawford helped make sure his wish came true by asking their friend Eric Gibson (of current bluegrass supergroup The Gibson Brothers) to help. A trip to Gibson’s former place of work, Dick’s Country Store and Music Oasis in Churubusco, New York, ended with the purchase of an Alvarez guitar.
Like many bluegrassers, Foster’s first music lessons were from his father, and he was soon participating in the music scene in New England. After graduating high school in 2010 he found his way to ETSU to study Business Management. After enrolling in a few bluegrass courses (which he intended to be electives), Foster became increasingly involved in the playing and jamming on campus and in the local area. He ultimately decided to focus on his music full time, and earn a minor in Bluegrass, Old-Time, & Country Music Studies to pair with an Interdisciplinary Studies degree.
Originally from Wells Bridge, New York, Foster graduated from ETSU in December of 2017. He spent two years holding down the guitar spot in the ETSU Bluegrass Pride Band and had been a part of two Bluegrass Today Top 20 singles with the group. He is currently earning a living by performing with his band Dreamcatcher at the Ole Smoky Moonshine Distillery, holding the lead guitar position with the Amanda Cook Band, and is also currently the Public Relations & Marketing Coordinator for the department of Appalachian Studies at East Tennessee State University.
Troy Boone-
Troy grew up in the Appalachian Mountains of East Tennessee. His early life was surrounded by music, especially bluegrass. The Boone Family is very musical, and Troy took to music at a very young age. He received his first banjo at the age of 7 and promptly traded it for a guitar due to the finger picks hurting his fingers. Playing guitar all throughout his youth, Troy found influence by classic rock and blues guitarists.
In his senior year of high school, he began to learn mandolin during his lunch period after receiving an F style from his brother. The mandolin soon became his primary instrument, as he set forth to attend East Tennessee State University. In 2016, Troy joined the Raleigh based bluegrass band Sideline, and toured the country with them for 3 years. In 2019 he received his first IBMA Award for his performance on “Thunder Dan” with Sideline.
Troy spends his time nowadays teaching music and finishing his bachelor’s degree in Audio Production from Full Sail University. He also performs frequently at the Ole Smoky Moonshine Distillery, along with writing & performing with his wife Carolyne in The Amanda Cook Band.