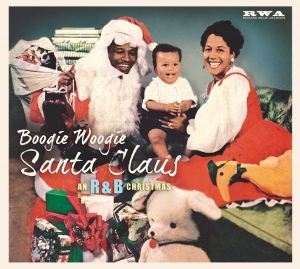 Blues and R&B records about Christmas have been released since the earliest days of the record business. Nearly 100 years ago, Bessie Smith recorded At The Christmas Ball in 1925, and Blind Lemon Jefferson chimed in with Christmas Eve Blues in 1928. Pre-war bluesmen Bo Carter, Tampa Red, and Charlie Jordan came up with variations on the theme, and the often-ribald duo of Butterbeans & Susie checked in with Papa Ain’t No Santa Claus (Mama Ain’t No Christmas Tree) in 1930.
The postwar R&B generation spent even more time committing holiday fare to wax. Jumping combos turned out swinging odes to Kris Kringle, sang about romance under the old mistletoe, and spun double-entendre-loaded tales, the latter only permissible to play on the trusty Victrola after the kiddies were safely tucked away in their beds.
This collection is sure to make your Christmas merrier. It ranges from the pioneering jump blues combos of Jimmy Liggins, Roy Milton, and Amos Milburn to grittier blues fare from Lowell Fulson, Cecil Gant and Charles Brown, to the straight-ahead rock and roll of Chuck Berry. Vocal groups are well represented with sweetly harmonized gems by The Five Keys, Drifters, and Orioles and peppier items by The Cadillacs, Moonglows, and Penguins.
So on Christmas morning, when you and the family are unwrapping your presents in front of the tree, slide this compilation into your CD player and bask in the hip sounds of holidays long past. In the world of R&B, Santa was a bit livelier than his counterpart in pop or hillbilly music. So join Mabel Scott as she tells us about a Boogie Woogie Santa Claus. These 29 vintage tracks – some of them quite rare – are just what you need to rock around the Christmas tree. There’s no better soundtrack for celebrating the holidays.

Richard Weize Archives is exclusive distributed by H'art / Bertus. www.hart.de/home-en.html
Record dealers in the USA can get our releases directly from: www.allmediasupply.com and www.aent.com
16
What's This
Advertisement