Bluegrass at the Crossroads - Lonesome is the Price I P 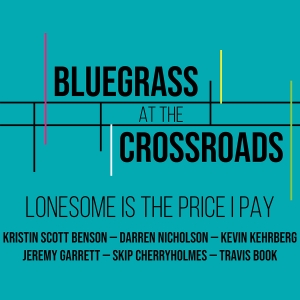 The latest entry in Mountain Home Music’s groundbreaking set of collaborations under the “Bluegrass at the Crossroads” banner drives home once again the project’s essential characteristic: bring together some of the best musicians in the genre over fresh material for recordings that blend individual mastery with the excitement of new musical conversations.

Co-written and sung by mandolinist Darren Nicholson of Mountain Home’s award-winning Balsam Range quintet, “Lonesome is the Price I Pay” is an archetypal bit of bluegrass — a happy-sounding song with miserable lyrics, as many observers have put it. In this case, the lyric’s narrative is built around a “get out of town” theme, punctuated with plenty of opportunities for the group to showcase the energetic, inventive playing that’s earned its participants acclaim from every corner of the bluegrass tent. In addition to Nicholson, they include Steve Martin Banjo Award recipient Kristin Scott Benson (The Grascals); Skip Cherryholmes of the award-winning sextet, Sideline; Organic Records’ artist and member of the GRAMMY®-winning Infamous Stringdusters, Jeremy Garrett (fiddle, harmony vocals), and Kevin Kehrberg, bassist for Organic Records’ Zoe & Cloyd, with Garrett’s Stringdusters bandmate Travis Book contributing a harmony vocal, too.

"Sometimes lonesome is the price you pay when you give your heart away,” notes Nicholson, who wrote the song with frequent collaborator, Charles Humphrey III (Songs From The Road Band). “It’s a bluegrass frolic about starting over. It hurts when we fall on the ground, but we also use the ground to get back up — that's the sentiment.”

From its muscular, banjo-driven kick-off to the final statement of the song’s title by the vocal trio, “Lonesome Is The Price I Pay” is an undeniable illustration of the way that Bluegrass at the Crossroads’ collaborations add up to more than the sum of their parts.

About Bluegrass at the Crossroads
A musical cauldron of distinctively American contributions largely rooted in the rural south, bluegrass has taken on a new identity in recent years, as new times and new musicians have naturally incorporated the sounds around them in every part of the country — and even the world. At the same time, an indispensable musical core has persevered, finding ever-changing ways to create performances that cause everyone familiar with the genre to say, “now, that’s bluegrass.”

Over the years, Mountain Home Music Company and its sibling imprint, Organic Records, have become home to a family of artists who are collectively creating music that forms part of that core, but also exemplifies the adventurous, wide-ranging side of the genre. Bluegrass at the Crossroads is a series of unique encounters between members of that family from every corner — geographical, generational, stylistic and more — of the music and the communities it has inspired, inviting them to collaborate not only through fresh takes on bluegrass classics, but especially with new songs that reflect and engage with the contemporary world.