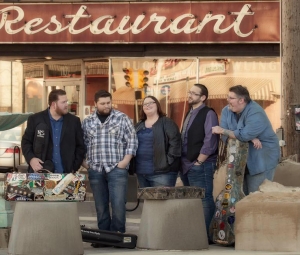 Blue Mafia’s second Pinecastle album, Hanging Tree, will be released on December 9th, 2016, and contains some of the group’s best recordings to date. The single, “Like a Mining Man,” was written by the band’s banjo player, Calib Smith. The album’s title track “Hanging Tree,” is the band’s rendition of the song originally from the blockbuster movie, “The Hunger Games: Mockingjay Part 1.” Among the twelve tunes on the album, band member Dara Wray has written three. Dara wrote several songs on the band’s previous album, Pray for Rain, including the hit title track.

Blue Mafia was formed in 2011 by Dara & Tony Wray, and has become a fan and promoter favorite. They are the 2012 DelFest Band Competition Winners, and have twice been awarded 3rd place in the SPBGMA International Band Competition.

“Blue Mafia is a fairly new band, formed in 2011 in Muncie, Indiana, by Tony and Dara Wray. But its members have spent years in other bands before becoming part of the Mafia… Good Album” – Keith Lawrence

Dara Wray grew up with bluegrass and has musicianship in her DNA. She began learning guitar from her father at age 17 and now plays mandolin and sings in the band. Tony Wray provides guitar and vocals for Blue Mafia and was formerly the banjo supervisor at the Gibson Instrument company. While living in Nashville he was a freelance musician playing with the biggest names in bluegrass. Rounding out the incredible talent in the band are Cody Looper on banjo, Kent Todd on fiddle and vocals, and Mike Gregory on bass.
12
What's This
Advertisement