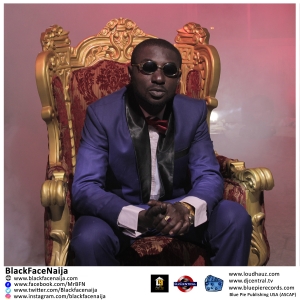 BlackFaceNaija (Ahmedu Augustine) was born to the Ahmedu Ocholi family in Obalende’s Creek Hospital in Lagos, Nigeria on the 30th of August, 1976. The state of Benue is where BlackFaceNaija and his father, RSM Ahmedu Ocholi called home. When his father retired, BlackFaceNaija started his education in the Army Children School in Otukpo, and then went on to Benue’s Mount Saint Gabriel’s Secondary School Makurdi. BlackFaceNaija graduated as part of the class of ’91. He went on to study Business Administration and Management (OND) at the Institute Of Management & Technology Enugu. After this, he decided to pursue his passion for music writing & performing.

BlackFaceNaija, then known simply as “Blackface”, formed the band “Plantashun Boiz” in the late 90s along with 2face Idibia as a member. 2face is one of the biggest acts in Africa to ever cross over to mainstream music in the rest of the world, and together, the duo wrote the highly successful “African Queen”. Later, the duo became a trio when they teamed up with Faze, AKA “Chibuzor Oji”, who still collaborates with Naija to this day. The group then debuted the album “Body & Soul”, which garnered a lot of nation wide buzz! The unique musical aesthetic that the Plantashun Boiz brought into the scene was a smash hit, and they were one of the most successful boy bands to come out of Africa!

Their CDs sold at least 50 million copies, however due to the rampant piracy in Africa, there are no charts to track this. Even so, Plantashun Boiz CDs are everywhere, as a testament to their popularity- piracy, official release, or otherwise. The Plantashun Boiz went on to release 2 more albums “Sold Out” & “Plan B”. In 2019, they released another single titled “The One”. This track in particular was a sneak peek from Plantashun Boiz’s upcoming 2020 album, “The Return”. The work of BlackFaceNaija and his crew sprung the Nigerian Music industry into the world of urban sound, and Naija’s personal style followed suit.

BlackFaceNaija went solo in 2003 and released his first single featuring Alabi, titled “Hardlife”. This track was a sneak peek of his debut album “Ghetto Child”, which featured bold commentary on the plight of his people. He urged the governing politicians to do better in providing social amenities for his people, embrace peace, and to put an end to corruption, insurgents and conflicts. The long awaited “Ghetto Child” album was finally released in 2004, and it put a spark back in the dancehalls of Africa with songs like “E DEY PAIN ME”, “Carry Us”, “Be Your Man”, “Oh Nigeria”, and many others! BlackFaceNaija instantly became a favourite of the people, and fans lined up for hours just to hear him sing for them, and to hear his message!

BlackFaceNaija has an incredibly rich history of musical releases that spans many years, which is a monument to his musical drive and passion! In 2005, BlackFaceNaija released the album “Evergreen” which had hits like “Ahead Of The Game”, featuring Mallam Spicy as well as Rocksteady (who would later become part of the “Trybunalz” group), and the hot track “Who Go Lead Us”, among other amazing songs.

In 2006, BlackFaceNaija released the album- “Jungle Fever”. This particular collection featured many dancehall smash hits like “Mr Police”, “Let The Stories Be Told”, and “My African Queen”, which was originally recorded by 2face Idibia as “African Queen” and was used in the “Phat Girls” movie soundtrack.

BlackFaceNaija teamed up with his new crew, the group known as “Trybunalz”. Together, they released another album titled “What We Are”, which addressed the issues of Nigerians suffering and in need. Songs such as “Don’t Mind Them”, “Government Kanji”, “Kpolongo”, “What We Are”, “Hear What I Say”, and many others pleaded for any kind of intervention to assist the suffering Nigerians left neglected.

In 2008, BlackFaceNaija released another album called “Me MUSIC & I”, which featured hits like “Erema”, “Do Well Well”, “Love You More” ft George Natz, “Probe Dem”, and many others. In 2010, BlackFaceNaija released yet another album called “Dancehall Business”, which enthralled listeners with tracks such as “Extraordinary Love”, “Gen For My Head”, “Like The Way”, “Where You Come” ft Rocksteady of Trybunalz, and 15 other songs!

However, this success sadly did not last without setbacks. Since BlackFaceNaija was not patronized by the mainstream media, they started spreading negative news about both him and the cabals in the Nigerian Music Industry. This effectively blacklisted him from engagements in any form that would portray him in a positive light. As a result, BlackFaceNaija went underground from 2010 till 2017, and after these seven long years he sprung up with yet another album titled “Defender (Vol. 1)”.

This comeback album was a fantastic resurgence, and featured about 20 songs, with catchy hits such as “Lifetime”, “Omeworom” ft Mc Loph, “Show Love”, “Robadoba”, “Abi Pale”, “Killah”, “Love To Love You” and many more! It made 2017 a wonderful year for Nigerian music.

BlackFaceNaija is now working on his next album called “Rising Sun” due in September 2019! Hopefully it’ll make this year just as good a year as 2017 was due to his amazing passion and talent. “Rising Sun” features promising tracks such as “Love You Na Crime”, “Badder Than Them” ft Skinny Rose, “Freedom”, “Sk Malawi”, “BuzMan of Def O Clan”, “Internet Girl”, “Naughty With You” ft Mackakay, and “My Avenue”!

“Rising Sun” is enjoying massive success on Airplay, and is just what Nigerians and BlackFaceNaija fans all over the world are waiting on! Stay tuned, because a release date will be announced in no time, and Naija will continue bringing his amazing and distinguished music to the people who need it!

BlackFaceNaija is a Blue Pie Records USA artist and published exclusively by Blue Pie Publishing USA. For more information on BlackFaceNaija please check out the links below.