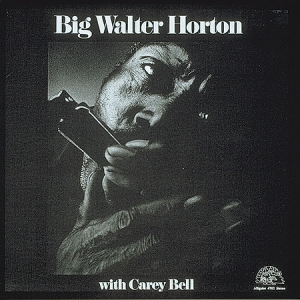 Big Walter Horton was one of the key architects of modern blues harmonica. Blues legend Willie Dixon referred to him as "the best harmonica player I ever heard." Along with Little Walter Jacobs and Sonny Boy Williamson II, he is considered to be one of the most influential harpists ever. He was capable of both intense power and fragile delicacy, often in the same song. He was endlessly melodically adventurous, and always unpredictable.

Walter Horton was born in Horn Lake, MS on April 6, 1917, but his mother soon moved to Memphis where Walter grew up. A child prodigy, he taught himself how to play the harmonica at the age of five. He later learned more about his instrument by working with pioneering harp players Will Shade of the Memphis Jug Band and Hammie Nixon, who recorded with Delta bluesman Sleepy John Estes.

Horton became one of the most in-demand young harp men in Memphis, playing with future Chicago blues greats like Eddie Taylor, Floyd Jones and Johnny Shines. Shines recalled that Sonny Boy Williamson II (Rice Miller) used to come to Horton for lessons, though Williamson was the older man. Even the brilliant Little Walter Jacobs acknowledged that he "ran" with Big Walter in Memphis during the 1940s, though he would never admit learning from Horton. Big Walter moved to Chicago in the late 1940s, but often returned home to Memphis.

Big Walter Horton's recording career began in 1951, when he and Memphis guitarist Jimmy DeBerry cut four sides for Modern/RPM Records. Two years later, he cut the superb instrumental “Easy” for the legendary Sun label. After moving to Chicago, Walter recorded a number of singles, including powerhouse recordings like “Hard Hearted Woman” and “Have A Good Time,” both produced by Willie Dixon. But Walter was never aggressive enough to keep a band together to capitalize on these recordings. In Chicago, a blues bandleader had to not only play the music, but also had to hustle the jobs for his band. For the shy, withdrawn Horton, this was an impossible task. As a result, his next session as a leader was in 1964, when he cut an LP, The Soul Of Blues Harmonica, for Argo, a Chess Records subsidiary. Although Walter played well, the sessions, again produced by his friend Willie Dixon, never quite jelled. On the other hand, Walter's featured track on the famed Vanguard Records' collection, Chicago/The Blues/Today!, caught him in a relaxed bandstand-style jam with his young student Charlie Musselwhite.

So, during the 1950s and 1960s, Horton worked mostly as a sideman. He cut with Muddy Waters on classics like “Blow Wind Blow” and the original “I'm Ready.” He was heard behind Johnny Shines on “Evening Sun,” with Otis Rush on the original “I Can't Quit You Baby” and his solo on Jimmy Rogers' “Walking By Myself” is considered a masterpiece. His harp sparked sessions with Willie Dixon on Columbia and BASF, with J.B. Hutto, Eddie Taylor, Floyd Jones and Johnny Shines on their Testament LPs, and with Johnny Young and Big Mama Thornton on Arhoolie, as well as appearing on Johnny Winter's first album on Columbia.

His only Alligator Records album, Big Walter Horton With Carey Bell, came out in 1972. It paired him with his young protégé, who had played under Walter's tutelage since Bell's arrival in Chicago. Walter's long-time partner Eddie Taylor joined them on guitar. It was Alligator's second-ever release, and received widespread critical acclaim, especially for the fiery harp duets that pitted the two harmonica masters against one another.

During the late 1960s and early 1970s, Walter toured with Willie Dixon's Chicago Blues All Stars, crisscrossing the U.S. and Europe. He appeared on albums with Fleetwood Mac and members of Savoy Brown, and on virtually every record Willie Dixon produced during those years. After the release of his Alligator album, Walter left Dixon to perform on his own. He appeared at many festivals, including the Ann Arbor and Miami Blues Festivals, the Monterey Jazz Festival and the Smithsonian Festival of American Folklife. When at home, he played with old friends like Floyd Jones and Playboy Vinson, primarily at B.L.U.E.S., the well-known Chicago club.

Big Walter Horton continued to perform and record for a variety of labels until his death in Chicago on December 8, 1981.