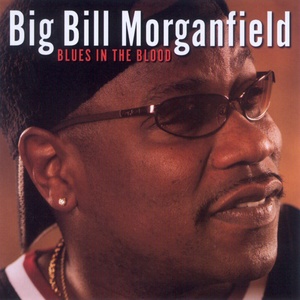 With his latest release, Big Bill Morganfield affirms that the blues is indeed in his blood. The appropriately titled Blues In The Blood is proof positive that he inherited more than just a regal blues pedigree and a wonderfully menacing baritone voice from his father - McKinley Morganfield, better known as Muddy Waters. As the son of one of the most influential musicians of the 20th Century, Bill rises to the challenge of meeting many of the burdensome expectations placed upon him. Blues In The Blood documents the full maturation of Bill's musical skills as a guitarist and songwriter and certifies that he is now a major talent in his own right.

His father's legacy lives on in the tools of his art. Big Bill has both Muddy's touring amp and the guitars on which he composed some of his earliest works. More importantly, Bill carries Muddy's spirit and love for the blues, and says he feels a spiritual bond with his father when he's on stage.

"My dad had a reputation for being a very dignified person, a very proud man. He gave us kids all a certain inner strength to go out and do whatever we needed to do." Musically, his father's influence came somewhat later. "Whenever I got the chance to hear him, it struck me strongly." But Bill didn't start off with the idea of being a professional musician until years later. It wasn't until after his father's death in 1983 that Bill decided to explore his musical heritage. "It gave me such an empty feeling, like someone had pulled the bones out of my body, like something was missing. I never sat down and asked all the questions I had for him. Now I feel like I get a chance to talk to him through my music."

Born in Chicago in 1956, Morganfield was raised by his grandmother in southern Florida and now resides in the Atlanta area. "Daddy always wished that one of his kids would follow him and play music," says Bill. "A few years after he died, I bought myself a guitar and started playing a bit. In my mind, I said I want to do a tribute to him. But it was years before I got a chance to do anything. I kind of locked myself away for about six years and taught myself."

He became stagestruck after performing with Lonnie Mack on Atlanta's Center Stage before a crowd of a thousand people. "I sang and played and the people went crazy. I was dancing around like a jumping bean. I realized I've got a love for this."

He first formed a band that played contemporary blues but that lasted only three months. He was unhappy with the sound of the music "so I dedicated myself to playing at a higher level." He retreated to his room to devote his energy to perfecting his guitar playing and sharpening his raw but undeniable talent. In the meantime, he used his bachelor's degrees in English from Tuskegee University and Communications from Auburn University to make a living as a teacher while he learned to play traditional blues. He spent countless hours methodically studying, ripping apart, and reconstructing songs. Immersing himself in this work, Bill learned the art of songwriting.

In 1999 Big Bill's debut recording, Rising Son, was cut in Chicago, where his father recorded many classic sides. The album was produced by Muddy's long time guitarist, Bob Margolin, who also played on the record. Three other former members of the Muddy Waters Blues Band also joined Bill in the studio: Willie "Big Eyes" Smith on drums, Paul Oscher on harmonica and Pinetop Perkins on piano. Bill said of the sessions, "It was so inspiring playing with these musicians. Working with them in the studio was a special experience. They really brought out the best in me; those sessions left me with memories I'll never forget."

An avalanche of praise followed the release of Bill's recording debut. From Billboard to People to National Public Radio's Weekend Edition, critics across the land were quick to extol the emergence of this impressive new talent. Guitar Player magazine summed it up by declaring, "Big Bill is a singer/songwriter who surely would have made Muddy smile." The New York Post touted Rising Son by saying, "This is one of the most impressive debuts to break in a number years." And the Boston Herald announced, "Morganfield brings plenty of originality to the party - in the high quality of his original tunes, his blunt yet effective guitar style and the way he casually rises to the first-rank level of his accompaniment." Perhaps the most gratifying acknowledgment of all came when Bill won the W.C. Handy Award for "Best New Blues Artist," the equivalent of a Grammy Award in the blues world.

Bill returned to Chicago in 2001 to make his sophomore recording, Ramblin' Mind. Producer Dick Shurman said, "Working with Bill was a dream. He's a great combination of talent, dedication & heredity." One highlight of the recording experience was when Big Bill teamed up with Taj Mahal to trade impressive vocal and guitar licks on two tracks. Of "Strong Man Holler," an original song that Taj wrote exclusively for the project, the Chicago Tribune remarked, "...it's eerie, as if his father and Howlin' Wolf had never left."

Billboard called Ramblin' Mind "a vital step toward the blues credibility he seeks...Morganfield shows that his blues have their own depth." Added Blues Revue, "Ramblin Mind goes a long way toward earning McKinley Morganfield's son loads of respect." Entertainment Weekly said, "Chicago blues is a powerful force in the right hands, which, in this case, belong to the son of Muddy Waters. The comparisons are inevitable, but the big man is up to the challenge."

Blues In The Blood was co-produced by Jimmy Vivino and Brian Bisesi, who was the road manager and a member of the Muddy Waters Band. Bill, who blocked off some time from his busy touring schedule to write and prepare for the recording, said, "I felt that I really had to carry this one myself, so I worked hard to make it good. Musically, it's heavily rooted in Delta blues, but in a modern way. It represents where I'm at now in my journey."

Blues In The Blood fulfills the promise of greatness displayed in his debut recording. It not only features Bill's distinctive, window-rattling voice and scintillating slide guitar, but also showcases him as a songwriter, with all the songs having been penned by Morganfield except for one Muddy Waters cover. Co-producer Bisesi said, "I was so impressed by how much Bill's songwriting skills have improved. It was obvious that he's deep into these songs, that they are close to him. As he said to me, 'I want people to know I got this in me.'"

"I think it's in the genes," says Bill. "I think I sound like my dad, but art is so hard to duplicate. To create is a better thing. So you create your own style, with the influence of others. I learned from my daddy, but I wanted to create myself." Blues in the blood indeed.