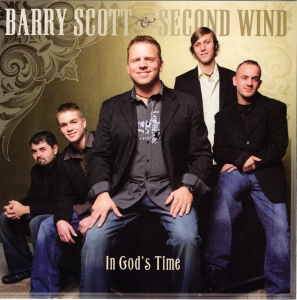 This is Barry Scott's first effort as a solo artist and bandleader after nine years of singing lead and playing bass and guitar with beloved bluegrass institution Doyle Lawson and Quicksilver. Composed entirely of gospel material, In God’s Time is a sterling showcase for not only Scott’s soaring vocals, but for a wide-ranging musical sensibility that encompasses and fuses southern gospel, bluegrass, and both classic and contemporary country. In Second Wind – Jason Leek (bass, tenor and lead vocals), Matthew Munsey (mandolin, baritone vocals), Travis Houck (Dobro, bass vocals), and Zane Petty (banjo) – Scott has assembled a band that is flexible and dynamic enough to follow wherever he leads.

Together on In God’s Time, Barry Scott and Second Wind explore an impressive array of styles and textures with remarkable maturity and grace. Set to a sophisticated chord progression, the contemporary-flavored title track is a powerfully relevant original (one of seven Scott compositions on the album) dealing with the consequence of one’s actions and the patience and dedication necessary to maintain enduring faith. At the other end of the spectrum, “A Glorified Body” is a disarmingly pure a cappella quartet performance of an old gospel standard Scott first heard his parents sing as he was growing up. “Southern gospel,” Scott says. “… that’s my roots.”

The result is a sincere, heartfelt sound that is unique to Barry Scott. His brand of gospel music is honest and true, intertwining its message of faith with an unflinching acknowledgement of worldly temptations and trials. Scott’s songwriting – a talent first honed during his years with Lawson – is a key component to keeping the sound personal and direct. His family plays a big part in the album, both in the songwriting and the performances. “When the Eagle Files,” a song about the hardships of life on the road and being away from the ones you love, features a touching harmony vocal from Scott’s daughter Cassandra. Scott’s tribute to his father, “Living Daddy’s Dream,” closes the album on a proud note. “That song came out of a conversation that me and my mom had,” Scott recalls. “She said I was doing something my dad had always wanted to do – but he never had the opportunity. That meant a lot to me. My dad had an old Realistic reel-to-reel recorder, and he used to sing into it while my mom was cooking. I went back to those old tapes and found one of him and I singing together when I was just a kid. We took a snippet of that to begin and end ‘Living Daddy’s Dream.’ Just taped it right off the old reel-to-reel.” One of Scott’s other musical heroes, Vince Gill, also makes an appearance on “Livin’ Daddy’s Dream,” playing finger-style guitar and singing tenor.