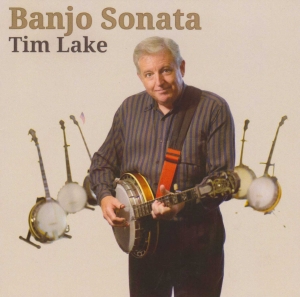 Banjo Sonata
Tim Lake’s new “Banjo Sonata” project explores two themes. First, he composed and performed his classical, three-movement, solo banjo sonata entitled “A Five String Banjo Sonata In G Major” with Movement I in Sonata-Allegro form. Second, the word sonata means ‘to sound,’ so he decided to use the banjos that he has accumulated over the years and play (and sometimes sing) a tune reminiscent of the music from that banjo and its era. This album demonstrates the greater meaning of the term Banjo Sonata by showcasing a variety of banjos and banjo sounds. There are many different types of music and banjo styles throughout this project encompassing original compositions, traditional tunes, classical pieces and popular songs. While most of these performances are for solo banjo, he is joined for two of his compositions by Jay Flippin on piano and Kuniyoshi Sugawara on shakuhachi flute.