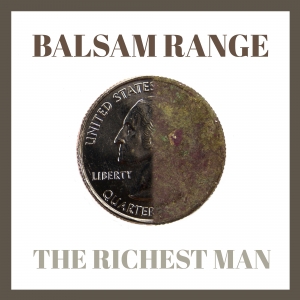 Two-time International Bluegrass Music Association Entertainer of The Year Balsam Range has an innate ability to create music that’s timely and poignant, relatable and honest. With their new single, “Richest Man,” the band that’s become a vital force in the roots genre shares an important lesson about recognizing what really matters.

“Richest Man” poses comparisons between material wealth and other kinds of abundance, challenging perceptions of what it means to be “the richest man in the graveyard.”

“Who has not thought about being the Richest Man? But what defines being rich? To have a life without regrets is easier said than done. The sacrifices made for gain can seldom be undone,” says Buddy Melton, Balsam Range’s fiddler and 2-time IBMA Male Vocalist of the Year. “The things lost and those won will only show with time. The old saying ‘You can’t take it with you’ comes to mind when I hear ‘Richest Man’ and the theme resonates throughout the song as it states ‘we’re all going out the same way that we came in…with nothing. So why in the world are we always worried about nothing, for nothing?’”

The western North Carolina quintet’s creative approach to arrangement has never been more apparent than it is here, where the elemental bluegrass force represented by Marc Pruett’s driving banjo is tempered with an innovative tempo shift that creates space for contemplation before returning with even greater intensity as the song closes.

Placing their instrumental prowess and mountain-grown harmonies at the service of the song’s message — “a hundred dollar bill folds just like a ten, and the fiddle plays ‘Amazing Grace’ just like a violin” — Balsam Range’s first new song since the release of the chart-topping Aeonic underlines what we all have common, at a moment when our universal humanity has never been more apparent.