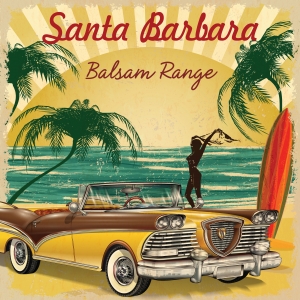 Though they’ve gone from success to success in the decade-plus since its formation, Balsam Range remains driven by a collective determination to find a great song and give it a great performance. Whether it’s a soulful appreciation of perseverance like “Grit And Grace,” the spirited meditation on what’s really valuable that took “Richest Man” to the top of last year’s charts, or the dramatic depiction of undeniable love in their previous single, “Rivers, Rains and Runaway Trains,” the combination of the group’s insightful song choices and powerful interpretation has resulted in a long list of fan favorites and the industry awards to go with it.

On their new single, “Santa Barbara,” the quintet offers yet another of the many outlooks and attitudes their music exemplifies. Sung by two-time IBMA Male Vocalist of the Year, Buddy Melton (fiddle), it’s a song that captures the complicated attitude of a man too self-aware to deny the gap between the life he lives and the one he wants — or to deny his own responsibility for the difference. “I’m tired of looking at you/Knowing I’m the reason that you’re crying,” it begins, and with each successive “I’m tired” — it’s the start of every line in the song’s two well-crafted verses — Melton convincingly conveys the narrator’s unsparing self-evaluation before leavening the verdict with an unexpected dash of humor that puts an exclamation point to the irresistibly hooky chorus:

Built on an archetypal three-chord, up-tempo bluegrass frame provided by hot songwriter Adam Wright and punctuated by high-energy solos from Melton, mandolinist Darren Nicholson, Caleb Smith (guitar, harmony vocals) and banjo master Marc Pruett over a steady pulse supplied by Tim Surrett (bass, harmony vocals), “Santa Barbara” is quintessential Balsam Range, offering one more reason why the group has earned multiple IBMA awards in categories that include Entertainer of the Year, Vocal Group of the Year, Album of the Year and Song of the Year.

“I’m so excited for the release of ‘Santa Barbara’ written by one of my favorite writers, Adam Wright,” says Melton. “With clever lyrics and an upbeat driving tempo, it is sure to have your foot tapping and mind wondering, ‘What if?’”

The 2018 International Bluegrass Music Association’s Entertainer of the Year, Balsam Range, has become one of the genre’s most award-winning acts. Since forming in 2007, the group has garnered 13 IBMA awards on the heels of 8 critically-acclaimed albums. Balsam Range has left audiences spellbound while headlining major festivals from coast-to-coast, selling out venues across the nation and in multiple appearances at the Grand Ole Opry. The band collaborated with the Atlanta Pops Orchestra Ensemble to record 2 albums, the second of which, Mountain Overture, debuted on the Billboard Bluegrass Chart at #5 and the Classical Crossover Chart at #6. Their album Mountain Voodoo, debuted at #4 on the Billboard Bluegrass Albums Chart and remained on that chart for 45 weeks. Three singles from that album reached #1 on the Bluegrass Today Chart, including “Blue Collar Dreams,” which spent three consecutive months at the top. After that, their album Aeonic debuted at #1 on the Billboard Bluegrass Chart and featured hit songs like “The Girl Who Invented The Wheel,” “Get Me Gone” and “Angel Too Soon.” The band most recently claimed the #1 radio chart spots with their singles, “Richest Man,” “Grit and Grace,” and “Rivers, Rains and Runaway Trains.” In addition to winning Entertainer of the Year, Balsam Range vocalist Buddy Melton won IBMA’s Male Vocalist of the Year and bass player Tim Surrett won IBMA’s Bass Player of the Year in 2018.