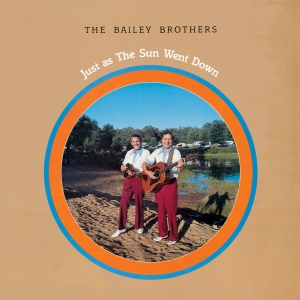 One of the great, pioneering “brother acts” of early country music, these new late Seventies recordings with a first-rate band show that Dan and Charles Bailey were still in the best of vocal form. Built around a full set of classic songs, the Bailey Brothers captured in style the pure sound of days gone by.

Family singing groups have played a prominent role in the development of country music from its very beginnings. One of the most well-liked forms of family groups, especially in the rural Southeast, was the legendary brother duets which flourished during the Thirties and Forties. One of the finest and most important traditional styled brother teams consisted of Charles and Dan Bailey who, in 1937 while yet in the teens, formed their first Happy Valley Boys band. They met with almost instantaneous success, becoming highly acclaimed as a regional band in the years immediately preceding World War II.

From Hawkins County in East Tennessee, the Baileys, like so many other Southern musicians, patterned themselves after the more successful brother duets of the day. Vocally they seem to have been influenced more by the Callahan Brothers, but there were echoes of the Delmore Brothers, Mac & Bob, and the Carter Family as well. Although they performed from time to time in the unmodified mandolin/guitar duet styles of duos such as the Monroe Brothers and the Blue Sky Boys, the Baileys generally fronted a full band and featured many trio and quartet numbers (Tennessee Ernie Ford sang bass in their original Happy Valley Quartet). The pre-war group generally included fiddle and Dobro. After they reunited following World War II, the Baileys dropped the Dobro and added five-string banjo. The postwar years saw them achieve their greatest popularity, performing on such prestigious showcases as the Grand Ole Opry and the World’s Original Jamboree.

It was by the addition of the banjo to the Bailey Brothers group that the transition from early country duet to full-fledged bluegrass band was complete. It is interesting to note that only one other well known Thirties brother duet, the Lilly Brothers, made the transition to bluegrass band (although several others occasionally performed in an early bluegrass format.) Charles and Dan Bailey have never really considered themselves to be bluegrass artists. Although they recognize that their sound falls within the larger body of music generally accepted today as bluegrass, they view themselves basically as singers of old-time country music. They still pick and sing exactly as they’ve always done.

By the time I first heard the Bailey Brothers “live” on the radio, they were well-established veterans with a large following throughout the Eastern United States and Canada. In rural areas, before television, there was little outside entertainment other than a radio. Saturday nights, especially in the winter, usually would find me glued to an old Brunswick floor model radio, listening to whatever country music I could coax from it. Once in a while the Opry would come in clear, or maybe the Old Dominion Barn Dance from Richmond, but generally on the little Northern Virginia hillside where I was raised the best signal came from Wheeling. There was some great music on the Jamboree back in those days. I can still remember Hawkshaw Hawkins (“Eleven and a Half Yards of Personality”), Red Belcher and his Kentucky Ridgerunners, Wilma Lee & Stoney Cooper, Doc & Chickie Williams, and Crazy Elmer’s zany antics. There were many other fine acts, too, that I’ve long since forgotten, but when the Bailey Brothers and their Happy Valley Boys joined the cast in 1952 they immediately became my favorites.

I had never heard anything quite like the Baileys. They combined the best characteristics of the country duets with the still relatively new sounds of bluegrass instrumentation. With them at that time were Don McHan “The Banjo Man”, “Fiddlin’ Tater” Tate, “Slaphappy Happy Jake” Tullock, and a female vocalist “Little Miss Evelyn” Bryan. They would appear on several 15-minute segments of the Jamboree sponsored by Mail Pouch Chewing Tobacco. After the live portion of the Jamboree, they would be featured on a 30-minute show on what was called the Midnight Jamboree. They came on at 1 o’clock in the morning, when I could manage to stay awake that long. Their duets were some of the prettiest music I’d ever heard, things like “The Sweetest Gift” and “Mountain Laurel” were several numbers that stand out in my memory. Equally impressive were their quartets, some of the most powerful hymns imaginable, ones like “Heaven,” “Where No Cabins Fall,” and “Hallelujah We Shall Rise.”

While there are many who have heard of the Bailey Brothers, there are relatively few following bluegrass music today who have actually heard them on the radio, or seen them on stage. When speaking of them today, I often have people say things to me like, “Weren’t they of those early duets?” or “I think the Osborne Brothers played with them at one time, didn’t they?” or “all those brother duets sound the same to me.” Well, yes…they were one of the early duets, and yes…Sonny & Bob Osborne did work and record with Charlie back in the Fifties, but no…brother groups don’t all sound the same, and the Bailey Brothers don’t sound like anyone else. To me they sound like the Bailey Brothers, pure and simple. Both brothers possess especially fine country voices that are as distinctive as they are superb. Charles’ clear resonant lead is readily distinguishable anywhere as is Danny’s clear unique tenor. When singing together they have a special blend of voices unlike any other group in the business.

Although Charles and Dan still appear together from time to time, they no longer play on a regular basis. For their previous reunion album, Take Me Back to Happy Valley (Rounder 0030), some former Happy Valley Boys joined the Baileys to re-create their marvelous music. Except for Joe Drumright, who filled in on banjo for Larry Mathis (who was unable to make the Nashville recording session because of prior commitments), the same band is heard again on this recording. With the exception of one quartet member, the album presents the duet sound of the Bailey Brothers, a style they have been performing for well over 40 years.

Many of the songs in the Bailey Brothers repertoire were learned from other brother groups. The Baileys picked up “Southern Moon” from an old Delmore Brothers 78. They have been performing their own arrangement of it for years, but with the same words as the Delmore version. In recent times they made an additional change: the original reference to “darkies” is now sung “old folks.” They Bailes Brothers, Johnnie and Walter, were the source of “I Want To Be Loved But Only By You” but the Baileys also recall hearing it as performed by Johnnie & Jack. “Just As the Sun Went Down” was learned from the Knox Brothers, although they recall it also from their childhood, and from church.

Probably the most important source of material for the Baileys was their family. They learned “He’s Knocking” from their Aunt Sally, their mother’s sister (who incidentally married their father’s brother). It’s a Primitive Baptist hymn they learned when they were seven or eight years old. Their earliest remembrance of “Little Green Valley” is hearing Hazel Lipe, their first cousin, sing it while they were still children. Dan sings lead on the verses of “Two Little Rosebuds,” which is a song the Baileys heard at home. They remember it as one their mother used to sing, and believe it to be a true story. “Broken Engagement” is another song they heard around their home, and it differs somewhat from the Carter Family version which they didn’t hear until some years later.

“This World Can’t Stand Long,” the only quartet on this album, was learned while the Baileys were members of the Grand Ole Opry. It was very popular with many country groups at that time. “Blessed Jesus Hold My Hand” is another “church song.” They first heard it performed on Preacher Barrett’s show on WJHL, Johnson City, Tennessee, by a family group called the Sunshine Quartet, made up of three brothers and a sister. The Baileys no longer recall where they learned “They’re All Going Home But One” but Dan thinks it may have come from Hazel and Grady Cole. They remember hearing “Sunbonnet Mother” on the Renfro Valley Barn Dance. It’s a song where Charles and Dan switch vocal leads, something they believe very few other groups ever did. They switch leads again on “Please Speak To Me, Little Darling” a number they picked up from the York Brothers. Dan and Miss Evelyn worked out the arrangement of “I Loved You Better Than You Know,” an old Carter Family song, and performed it often together. After she left the band, Charles and Dan continued singing it.

Here then are the latest recordings of a truly unique duo, Charles and Dan, the Bailey Brothers; one of the pioneer groups in bluegrass and old-time country music.

The early recordings of the Bailey Brothers are featured extensively in Rounder’s multi-CD package, The Early Days of Bluegrass.