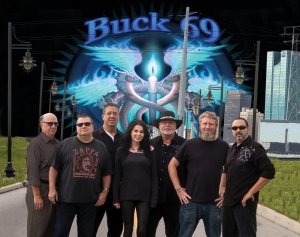 It's like Bob Seger meeting Jonny Lang in a Juke Joint to talk about Eric Clapton.

A father and son blues rock band mixing together the old and the new to create electric contemporary blues. Buck69 is influenced by more than three generations of music. They are influenced by who, what, where, when and how their everyday lives start and end Music is Buck69's way to express their inner feelings. To cement in history the people, places and things that affect the bands lives. Be it happy or sad, life or death. They write about what carry's them down life's highway. Always in search of that one song Because: Great singers, writers and musicians will come and go, but a great song lives forever . The band offers a diverse ageless genre of Electric Blues and Roots Rock