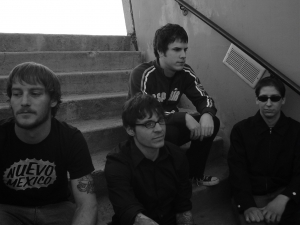 August Spies, consisting of Gabe Salinas (guitar), Seth Hurwitz (guitar), Steve Pusztai (drums), and Dave Goldstein (bass), formed in the fall of 2004 in Albuquerque, NM. Steve and Dave had played together in Simulacrum (Steve was also previously in Adams Alcoholics), while Gabe was a member of post-hardcore heroes Last Day Parade. Eschewing the conventions of any one genre, August Spies have forged a unique creative vision consisting of punk, dance, and dub, accented with spacey atmospherics and flourishes of math rock. This approach is bolstered by a fierce commitment to the DIY aesthetic and punk values that have influenced their lives.


The quartet has built a loyal following locally and regionally with their high-energy live shows and will play a series of regional dates in the spring of 07 and a summer tour in 07. Their debut EP was released on their own Blue Island Records in the fall of 2005. Their brand new full-length 'New Catastrophe" will be released independently in the spring of 2007.

"Smart, tight songs--songs that kick over the genre trashcans as they run rowdy down Pop Ave. A stew of post-hardcore, punk and dance atop sudden math rock on-a-dime changes. Don't jam an August Spies disc if you're looking for the average heartbreak fare. "New Catastrophe", the debut LP, finds a precise balance between technical chops and good energy, easing the jolt of sudden gear shifts."
--Marissa Demarco, Weekly Alibi


"The music on the debut full-length from this Duke City quartet has an urgency about it. These are definitely not pop songs, but the tunes still possess hooks over the course of 4-minutes plus. And as the band says: Everybody "sings."


The post-punk New Wave of opener "Pedaling Backwards" is dance rock with echoey vocals and chiming guitars. The guys rock out on the punky-dubby "Spades," while the futuristic funk of "Eye of the Liger" gets by on a dub/ska beat and angular guitar progressions. The post-hardcore closer "Came and Saw" could be interpreted as an anti-Bush, anti-war song."


August Spies has shared the stage with the likes of:
Sparta
Hella
Run, Run, Run
Love Me Destroyer
Park
Stereotyperider
Traindodge
Dropsonic
Your Name In Lights