Anya Hinkle - "I Belong to the Band" [Single] 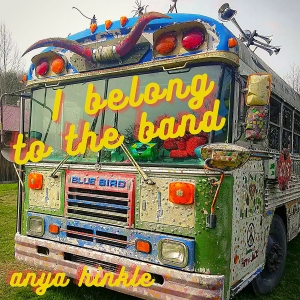 Sometimes even the most determinedly original artist finds a song from another source that speaks to her circumstances so powerfully that she must find a way to make it her own. For Organic Records’ Anya Hinkle, the passage of time and events has only made her new single, “I Belong To The Band,” even more meaningful, and there’s no one better equipped to tell its story than the singer/guitarist herself.

“I discovered ‘I Belong To The Band’ thanks to my friend and clawhammer banjo master John Herrmann, who gave me a recording of it by their old-time band, The Ruglifters,” she says. “The song resonated so deeply with me for its simplicity, its inclusiveness, and the sense of gratitude it imparts. It was written by Rev. Gary Davis and originally recorded with his signature fingerstyle blues guitar and powerful voice.

“When the personnel in my band Tellico turned over early in 2019, I began transitioning to performing under my own name. But I still had a full calendar of band shows I was scheduled to perform, including a European tour and official showcases at IBMA.

“I wasn’t exactly sure how I would pull it all off,” Hinkle continues, “but I somehow managed to find a group of musicians that showed up for me in every possible way that I needed. They allowed me to experience music with more gratitude than I have ever felt, making the best music I’ve ever made in my life, and the best I’ve ever felt making it. We performed this song at every show that we played.

“When Billy Cardine and I sat down to arrange it for the studio, Billy laid down a dobro lick that emanated from his joyful and fun-loving spirit. When we added Julian Pinelli (fiddle), Thomas Cassell (mandolin), Johnny Calamari (bass), and a 3-part gospel chorus of Mary Lucey, Julian Pinelli and myself, it intuitively had a swingy, playful, joyful New Orleans string band sound that really captures the feeling we discovered playing together last year. I sang “Hallelujah, I belong to the band!” with all my heart when we walked into Crossroads Studio to record it with help from Jon Weisberger (producer) and Van Atkins (engineer).

“We have had so much and so many taken from us this year by COVID-19,” Hinkle concludes, “and our gratitude for those that have stood by us and been there for us during this difficult time is deeper than ever. We are grateful to those that have been essential workers and health care workers, and we acknowledge all of those that are struggling so hard to keep things together every way that they possibly can. We are going to get through this.

“‘Hallelujah, I belong to the band!’ Let’s work TOGETHER toward a better and brighter future for humanity.”