Anya Hinkle - Eden and Her Borderlands 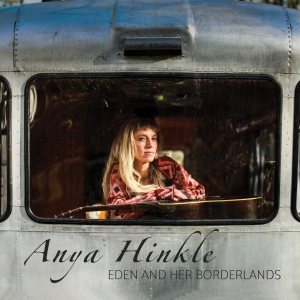 Throughout her career, Anya Hinkle has been recognized for her vivid storytelling, vibrant musicianship and arresting honesty as she explores the beauty of song craft through the lens of the Appalachian string band tradition. She’s won the MerleFest Chris Austin Songwriting Competition and was a finalist in the Hazel Dickens Song Contest for her song “Ballad of Zona Abston,” featured on her former band Tellico’s 2018 release Woven Waters which had a #1 single, #1 band and #2 album ranking on the Folk DJ charts in November 2018.

Now, as she continues to emerge as a solo artist, Hinkle is set to release her debut album Eden And Her Borderlands with Organic Records.

This new collection — now available for pre-order, add and save ahead of its July 16 release — is roots music in its most modern form and includes six critically acclaimed singles.

Of the album, Hinkle says, “Eden represents the essence of life, the wholeness, innocence and perfection that is our birthright, those things that seem to get stripped away from us along our journey. The past year isolated us and, despite the hardships of the pandemic, I had an opportunity to view myself and my circumstances differently. Living in uncertainty, I cancelled all my plans and lived more in the moment. I became more grateful for what surrounds me: my home, my pets, my family, my neighbors, my community. I gained a deeper appreciation for those that support us: mail carriers, medical workers, grocery store clerks, the guys on the garbage trucks. I began to feel unexpectedly open and curious, like I was moving ever closer toward Eden by breaking open my heart and mind.”

“This album is an expedition through the great pandemic experiment, with songs that touch on the many facets of a life in isolation. ‘Lady Luck’ asks, ‘Will you hold the line for me?’ asking the existential questions that surfaced: Am I doing what I am meant to do with my life? Is it time to make a change? ‘Road of the Winds’ searches for Eden, for the Motherland, beseeching the winds to ‘lift me up, take my hand, fill my sails and guide me on again.’ There were storms, like the one described in ‘Hills of Swannanoa’ — ‘then it rained, Lord it rained, oh the tears came pouring down like rain.’ There were benevolent spirits like ‘My Faithful Sparrow’ who ‘at the dawn from the sky, you spread your wings and fly on down to me.’ And there were times when there were no words, like the far-ranging instrumental ‘Meditation: Beyond the Shores of Darkness.’”

“The album also touches on the political landscape of 2020,” Hinkle continues. “The killing of George Floyd and the tumultuous aftermath inspired myself and co-writer Graham Sharp (Steep Canyon Rangers) to ask ‘What’s It Gonna Take’… ‘to break these walls in between?’ And R.B. Morris’ ‘That’s How Every Empire Falls,’ famously covered by the late John Prine, speaks to the alarming oppressiveness of the Trump presidency.”

“Finally, the album celebrates friendship and community, starting with ‘Hallelujah! “I Belong To The Band,” an upbeat cover of Rev. Gary Davis’ gospel tune. There is also a celebration of sisterhood with an eye-roll to the patriarchy in ‘Why Women Need Wine’ — ‘Honey, I know you didn’t ask me, but let me give you a piece of my mind…’ The album concludes with the open-armed ‘Merciful Dawn,’ saying, ‘Come on over here, I’m right here by your side, Doncha sing a sad song alone.’”

“After releasing albums for over 10 years in various collaborations, this album makes me feel as though I have reached the borderlands of the essence of my expression as an artist,” Hinkle concludes. “Approaching this Eden, for me, reclaims a sense of purity, innocence and faith. As the first record I’ve ever released under my own name, every song was written and selected especially for inclusion on it, and all the performers were chosen because they ‘belong to the band,’ because they showed up for me as I stepped out on my own. I am awed by their talents and grateful for their support. I am especially grateful to my team at Organic Records, producer Jon Weisberger and engineers Clay Miller and Van Atkins, and for my family who supports me always.

Pre-order, add or save Eden and Her Borderlands HERE.

About Anya Hinkle
With vivid storytelling, vibrant musicianship and arresting honesty, Anya Hinkle explores the beauty of song craft through the lens of the Appalachian string band tradition. Originally from the mountains of Virginia, Anya’s music is steeped in the tones of folk and bluegrass and seasoned by travels across the world. A founding member of Asheville-based bands Dehlia Low (Rebel Records) and Tellico (Organic Records), Anya will release tracks from her first full-length album under her own name this year on Organic Records.

Hinkle won the MerleFest Chris Austin Songwriting Competition in 2019 and was a finalist in the Hazel Dickens Song Contest for her song “Ballad of Zona Abston,” featured on Tellico’s 2018 release Woven Waters. The album, produced by Irish guitar legend John Doyle (Transatlantic Sessions, Joan Baez, Tim O’Brien), had a #1 single, #1 band and #2 album ranking on the Folk DJ charts in November 2018.