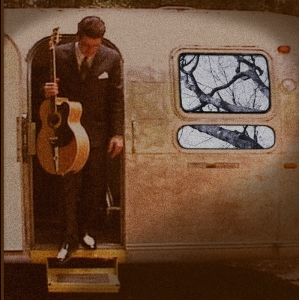 R.J. "Antsy" McClain has lived all over the country, but was raised in a small Kentucky trailer park by an Avon-selling mother and a truck-driving father. Being raised in a hard-working, blue collar family, it has been hard for R.J. (nicknamed Antsy as a child, for his still-present high energy) to embrace life as a songwriter.

"I've only recently been able to admit to people that I'm an entertainer," he explains, "And even still, I wince a little bit when I say it. That's just not something you grow up and do in my family. But I'm getting more used to it and my family is too. I think."

McClain has worked on farms, in factories, and in restaurants he's been an artist, a teacher, a tour guide, and a Japanese interpreter. He started taking his guitar with him on the road as an interpreter for the Japanese auto industry in the late 1980's, where he first began writing about life as he knew it; growing up in a small American trailer park. He now lives with his family near Nashville, Tennessee.

Growing up listening to his mothers record collection, McClain absorbed everything from Aretha Franklin to Buck Owens. Then, 70s folk rock found him as a teenager, and hasnt let go since. One of his earliest influences was Jim Croce, who died when McClain was a kid, only months after he had learned to play Bad, Bad Leroy Brown on his $70 Sears guitar (which he still owns).

"If Croce was still alive today," recalls McClain, "I dont know that I'd be as compelled to write songs like I do. He said so much in his short life Im sure he'd be beating a lot of us lesser songwriters to the punch. And I loved the way he could make you laugh and cry a little within one 45 minute set."
Time-Sweetened Lies is Antsy's debut as a solo artist, having fronted the musical comedy band The Trailer Park Troubadours (or "The Troubs" as they are called by fans) for over 10 years. "This solo thing is something I've wanted to do for some time now," says McClain, "I've written a lot of homeless songs that dont fit what we do with The Troubs. Finally, with the help of some good friends, I've been able to put this first collection together."

This solo outing doesn't mean Trailer Park Troubadour fans have any need to worry -- only rejoice. The Troubs are going strong, and only getting stronger. And McClain is certain Troub fans, called Flamingoheads, will love the solo albums as well. "Its obviously not all laughs," says McClain, "But neither are the Troubs' albums, really. We mix it all up there as well. But most of the songs on Time-Sweetened Lies, for one reason or another, would cause folks to cock their heads a little if it were in the middle of a Troub album."

Having been called a Renaissance Man, Antsy takes on the songwriting and producing duties for The Troubs' projects as well as designing the CD packaging. "I've always drawn," says McClain, "And I first started doing all the artwork for our merchandise to save us money. I've probably saved us thousands of dollars over the years, and I had a fun time doing it." Regarding the moniker of Renaissance Man, McClain just laughs, "A Renaissance Man would probably be able to work on his car and balance a check book -- two tasks I have a difficult time doing. No, I just draw pictures and make up songs. (Laughs) Pretty sad, really."

"We always thought Antsy would grow up to be an artist, exclaims his Aunt Vivian, "He always carried a drawing pad with him wherever he went. I remember him copying things out of Mad Magazine." Antsy still enjoys various art projects during those rare times he's not attending to his performing/songwriting career or spending time with his family. Among his personal art projects are a couple of children's books he plans to self publish soon.

Friend, manager and guitar player, Jimmy Jackson, is one of those who've been prodding McClain to do his own CD since he first heard these "other" songs several years ago. "It's not surprising that Antsy is also a visual artist when you hear his lyrics," says Jackson emphatically,"It's like the rest of us are looking at the wall, and he'll say something that lets you in on his thought process, and you realize he's not just looking at the wall; he's looking through the wall. These are the best songs I've ever heard. It kills me that Antsy is one of our generation's best songwriters, and no one knows it. Yet!"

Eddie Dean Mattingly, co-producer of Time-Sweetened Lies, agrees. "Antsy is one of the brightest songwriters in America. It's that simple. The root of my passion with this project comes from just wanting as many people to hear these songs as possible. As we were working on the recording, I passed it around to my friends; many of whom are world-class musicians Tommy Emmanuel, Pat Kirtley, and Pete Huttlinger, to name a few and once they heard the material, they were asking me if they could play on it. The same was true when the songs got to Lindsey Buckingham. He liked what he heard and wanted to be a part of it. Thats how all these wonderful guest artists ended up on Antsy's debut album: they just heard the songs."
4
What's This
Advertisement