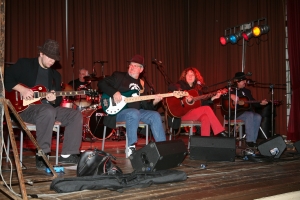 All Songs Written By Anne Barby

The collective musical background of the band members is-: folk (American and British), blues, blue grass and early rock'n'roll. The gigs have been diverse, from eight people and a dog in a smoke fill bar, to 3,000/10,000 at music festivals and 80,000 at an anti-nuclear rally in Melbourne. This roller coaster journey has been happening for the last 25 years. The stage has been shared with some of the top Australian artists Christine Anu, Jimmy Little, Shane Howard, The Bushwackers and John Williamson. We grew tired of the same old gigs, so we just stopped playing.

Anne's writing continued however so after 12 months we reformed with renewed vigour and excitement and recorded this new album. We now look forward to swamping the general public with our own Australian folky/bluesy style.

This CD depicts the colourful landscape of Australia as it is now, the people and the earthy mysteries therein-captured on a passionate canvas - heartfelt, alluring, moody, elusive, a whirlwind of variation and raw music. GET INTO IT!

There is a hint of Janis Joplin in Anne's vocals and influences of Mark Knopfler and Eric Clapton in the music.