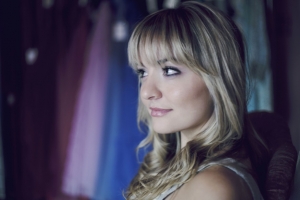 Anna Gilbert Music: a brief overview
"As much as any girl can be born into her calling — fate being what fate is — Anna Gilbert was born into music. The Oregon native’s earliest childhood memories are suffused with sound, melody, and the songs of James Taylor and Ricky Skaggs, Paul Simon and Joni Mitchell — artists whose work she seems to have breathed through the gills" (Rick Levin, Eugene Weekly). Gilbert’s father was a music major and teacher before becoming a minister, and both her parents were in a bluegrass band. Gilbert always wrote and performed songs on her own, but in college she teamed up with Grammy winning producer Charlie Peacock after a chance meeting in Seattle. Peacock discovered her music at a songwriters conference, and immediately knew he wanted to work with her. The two made a record that would break new ground for her called “Your Love My Medicine”. Peacock describes Gilbert saying "she's the surprise you've been waiting for. Not only are her music skills in order, her personality is magnetic. She's the kind of artist I love to work with -- daring, teachable, funny, loving, and serious all at the same time." Anna embarked upon an Artist Development deal with Peacock through his production company and benefitted from a young artist mentoring program sponsored by the non-profit, Art House America in Nashville, TN. Anna's records have earned her awards in her own home town (Eugene Weekly's winner of "The Next Big Thing") as well as in the indie music scene. She was the 2007 and 2009 winner of the "Inspirational Artist of the Year" award at the “Indie Momentum Awards" in Nashville, TN sponsored by indieheaven.com. She has been written up in RELEVENT Magazine, The San Jose Mercury, and the University of Oregon’s Alumni Association’s newsletter for her achievements as an independent artist. In 2010, The ONE Campaign flew Gilbert and her entire band to Washington DC to headline a concert at the historical Ebenezers Coffeehouse. Gilbert’s latest Holiday release entitled “Christmas” was an Editor’s Pick on CDbaby.com, the most successful independent music distribution site in the world.
Gilbert and her band and have been touring the West Coast for the past two years playing colleges, coffee shops, churches, and clubs. She plays guitar and piano and although she was an English major at the University of Oregon, she considers herself primarily a songwriter. She has even penned a couple tunes for WORD Publishing in Nashville, TN and continues to write songs with them. Gilbert describes herself saying, "I'm not an entertainer as much as I am, first and foremost, a storyteller and songwriter. I am a chronic social sponge when it comes to what's going on around me, but I always try to put the glories and disasters of the human experience into my songs in hopes that it will lift people's spirits and give them a more positive outlook on life."
Gilbert’s most recent project is a co-produced holiday album entitled “Christmas”. Gilbert produced the album with band mate, Wilson Parks. It features two brand new songs, as well as many other famous and well loved carols. What sets this album apart from other Christmas CDs is Anna Gilbert’s sweet and unique interpretation of the songs, as well as the re-imagined instrumentation of each Christmas carol. Each tune gets updated in Gilbert's style, but maintains the original identity and structure.
Gilbert’s Christmas album follows an EP made in Nashville, TN at The Art House in late 2009 called “Like a River” produced by Sam Ashworth and Matt Slocum of Sixpence None the Richer.