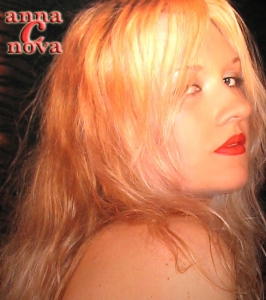 Anna C. Nova, Russian singer, songwriter, performer and producer (who has been called “the best and most famous producer of the international level in Russia”) is a household name in her hometown of Saratov, Russia, (an old city of two million, on the Volga, 400 miles southeast of Moscow and 200 miles north of Volgograd, whose climate resembles Chicago’s) where her artists regularly perform to standing ovations, win music competitions, and receive half-page articles in the local paper. What is unique about the bilingual Nova is that she writes and sings music in English, and her style is international, not traditional Russian. She also performs electronic music and makes recordings with her artists at her own award-winning studio in Saratov, near the apartment where she has always lived, and shares with her mother and seven cats.

Her first CD, Paradise, which she sings herself, received attention from noted producers Luis Rodriguez and Dieter Bohlen in Germany, and was 1st on the “Music in Demand” chart in Germany in 2002 for 16 weeks (Britney Spears was #8!).


Nova quickly attracted other young artists and wrote and produced and recorded music to help them launch their careers. The result was a series of singles sung by other artists including “Where is my Santa”, a whimsical Christmas song that received great reviews, and was loved in Saratov, where the Russian audience did not know the words but still asked for repeated encores. “We need a clone of Anna” said artist R-Oxolana—“no one else can do as many things as she does, or do so much work. She is a fanatic.” Nova works at her art 6 days a week, until 10pm each night. Despite Paradise’s success, Nova’s real joy is developing talents of other Russian artists. “I don’t make a star” she says, “I build the real artist.”

Nova’s next step was to start “musical bridge”, a project to make Russian artists known in the West, which attracted the interest of Goettel Publishing, a Santa Monica company owned by Jim Goettel. He met her by accident—he asked her about another Russian song that intrigued him, and she emailed him that she too had some interesting music. Jim was skeptical—he had just been with another company whose owner promised huge success from his artist friends, but which failed. He listened to her demo, however, and was impressed. “Nova can write anything. Paradise is pop with classical elements; there is a hip hop song, ‘Out of Self Control’ and pop songs with dance and electronic elements. There is just enough Euro pop flavor to make it distinctive. And the lyrics are powerful. In addition, she already had success in Russia and Germany, and should do even better in the USA where people speak English.” He then shared the songs with other music professionals and “got awesome comments, like the head of SESAC telling me that Nova is the European Madonna/Britney Spears, or a review calling her ‘my new dance diva,’and I had friends assuring me she would be successful, even after witnessing the prior company fail.”

Anna, in turn, was impressed by Jim (who had traveled to Russia) knew some Russian. “Anna is easy to please—just say something in Russian! Russian with an American accent is amusing, for some reason” Jim said, adding that the accents of Anna and her artists “are also amusing at times.” Together they formed the record label Nova Songs, and released “Best of Nova,” a compilation of songs from Nova’s artists and a website, www.novasongs.com. More recently, Nova’s artists have released 3 singles, most notably the inspiring “(You’ll Be) Mine” by Elena Cherkasova, which is soaring up internet charts.

Versatility and originality are Nova’s strength. The music is full of hooks, and the artists have impressive voices. But classifying it was a dilemma. “Out of Self Control” is described as hip hop by pop artists, pop by hip hop artists; Paradise is described by Nova as “pop with classical elements” but others call it electronic or too original to categorize. The new songs are called 70s club music by some people, electronic by others, and some even called it Euro pop, a label Nova wants to avoid. “Where is My Santa”, in a review giving it 5 stars, was called “a crazy song in the best sense of the word.” “That is why I really love ‘(You’ll Be) Mine’” says Jim, “it’s a perfect upbeat pop ballad that reminds people of Irene Cara’s fame or Gloria Gaynor’s “I Will Survive” or other great pop songs. It sounds like it came from an American pop icon.” Adding to the confusion was that Nova looks like a glamorous model, not a serious producer, as do some of her artists. “I get people saying ‘I knew Russian (or Eastern European) women were beautiful, but I didn’t know they were so talented’” Jim adds. “Well, now they do!” He noted that Nova simply wants to be a great musical producer. “She isn’t spoiled or self-centered. She just loves music” says Jim.


Nova is currently having her music promoted online on sites like Musicrush.com and seeking American artists to collaborate with. This will give her and her artists a chance to tour the USA and make Russian artists known in America, and vice versa. Though she has been to Western Europe, Nova and her artists have never been to the USA. “We would love to visit the USA—the people seem so funny!” - says Nova with a smile. –“seriously, I think American people are very flexible, easygoing and opened to everything new and progressive. Progressive way of working is my style, that’s why I’m sure that collaboration with American artists can bring us new ideas and success”. In the meantime, she will be writing more music. New singles by Dasha and Elena Cherkasova are planned, and Nova Songs may re-release Paradise in the USA. In the meantime, sample her music online!


You can buy “Best of Nova” or sample or download any of Nova’s songs at www.musicrush.com. For more information, or to contact the artist, go to http://www.novasongs.com/