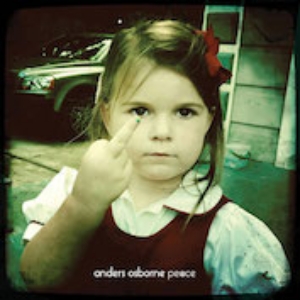 
The first ELEVEN tracks listed in the player comprise the upcoming release, Peace

Between the potency of his richly detailed songwriting, his intensely emotional, soulful vocals and his piercing, expert guitar work, New Orleans' Anders Osborne is a true musical treasure. He is among the most original and visionary musicians writing and performing today. Guitar Player calls him "the poet laureate of Louisiana's fertile roots music scene." New Orleans' Gambit Weekly recently honored Osborne as the Entertainer Of The Year. OffBeat named him the Crescent City's Best Guitarist for the third year in a row, and the Best Songwriter for the second straight year. Osborne also won Song Of The Year for his composition, "Louisiana Gold."


Since the release of his 2010 Alligator Records debut, American Patchwork, his 2012 follow-up, Black Eye Galaxy, and his critically acclaimed 2013 EP, Three Free Amigos, Osborne has earned hordes of new fans. He has toured virtually non-stop, either with his road-tested trio, as a solo artist, or as a guest with his countless musical admirers, including Toots and The Maytals, Stanton Moore, Derek Trucks, Warren Haynes, Keb Mo, The Grateful Dead's Phil Lesh and Karl Denson's Tiny Universe. He's appeared on Galactic's Ya-Ka-May album, and in 2011 produced and played on critically acclaimed albums by Tab Benoit, Johnny Sansone and Mike Zito.

Now Osborne delivers the next chapter of his spiritual odyssey, Peace. With the new CD, Osborne continues the journey started by American Patchwork and Black Eye Galaxy, emerging from a whirlwind of emotional chaos and moving toward a sense of inner peace. Recorded at Dockside Studios in Louisiana and produced by Osborne and Warren Riker, Peace looks at the title subject from all angles. Drawing strength and inspiration from his family and friends, Osborne created the most observational record of his career. According to Osborne, "Peace is light from darkness. The songs are written from the outside looking in. They are not making any judgments. I'm just stating facts. I'm writing from a brighter perspective. There's less dusk and dark, and much more sunlight. The results are greater than I expected. The driving tones and sounds are free and natural. This is one of the coolest records I've ever made."

Since his recording debut in 1989, Osborne has written virtually all of his own material and contributed memorable songs to a wide variety of artists. Two tunes co-written by Osborne appear on Keb Mo's Grammy-winning 1999 release Slow Down. Country superstar Tim McGraw scored a #1 hit with Anders' song "Watch The Wind Blow By". Osborne's compositions have been covered by artists as diverse as Brad Paisley, Tab Benoit, Jonny Lang and Kim Carnes. His songs have appeared in multiple feature films. He can also be seen performing in an episode of HBO's New Orleans-based drama, Treme.

When Osborne planted his roots in New Orleans almost 30 years ago, he could not have realized that he would become one of the city's favorite sons. He was born in Uddevalla, Sweden in 1966. With a love of music, a knack for the guitar and a serious case of wanderlust, Anders began traveling on his own at 16. He wrote constantly, soaking up life experience and honing his craft. In 1985, after landing in New York with only five dollars in his pocket, Osborne hitchhiked to New Orleans to meet up with a friend. "Once I got to New Orleans, everything I heard in my head—the music, the way people treated each other—was happening. I knew I was home." He naturally absorbed the spirit of the Crescent City into his soul, as he was fully embraced by the city's vibrant music community. "I just knew I was where I was supposed to be," Osborne says.

Anders spent his first few years in New Orleans writing and developing his sound and style, all the while continuing to soak up the music of the city. He cut his first two albums for the independent New Orleans-based Rabadash Records in 1989 and 1993. The excitement surrounding those releases led to a major label deal with Sony's Okeh imprint in 1995. Osborne released a series of critically-acclaimed albums on the Shanachie and MC labels before joining forces with Alligator Records.

With the 2010 release of American Patchwork, Osborne's fame suddenly reached a whole new level. Critics went wild, with OffBeat saying, "The record is a focused and tuneful triumph. Osborne's gifts as a guitar player are significant. His voice is so emotionally intense it feels like an explosion. He writes with remarkable eloquence...this is the living definition of great art." 2012's Black Eye Galaxy raised the bar even higher. Blurt says, "Anders Osborne follows his vision, inspires us with his story and dazzles us with his craft." Three Free Amigos featured six semi-acoustic tracks recorded in a relaxed, laid-back atmosphere. Relix says the EP is full of "rugged, soulful singing and superb hard-hitting songs…A phenomenal blend of self-awareness, spirit and muscle."

With Peace, Anders Osborne writes the next chapter in his still-unfolding story. The album's deeply emotive songs are cathartic and evocative, poignant and soulful. He'll tour heavily, bringing his music to fans across the globe. The San Francisco Chronicle says, "Anders Osborne is a fearsome, gut-wrenching guitarist, a riveting singer and rootsy, blues-drenched songwriter." Paste simply says Osborne is "mind-boggingly great." Night after night, on stages all over the world, Osborne continues to prove those words true.