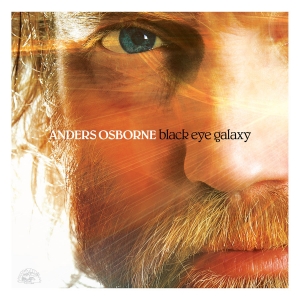 Between the sheer force and potent lyricism of his guitar playing, the riveting depth of his songwriting and the straight-from-the-soul conviction of his vocals, New Orleans’ Anders Osborne is among the most original and visionary musicians writing and performing today. Relix says Osborne plays “hard-hitting songs” featuring his “raging, expressive guitar and soulful singing…from scorched-earth rock to sweet, tender ballads.” OffBeat magazine recently named Osborne the Crescent City’s Best Guitarist for the second straight year, and also awarded him with the Best Roots Rock Artist title. Guitar Player called him, “The poet laureate of Louisiana’s fertile roots music scene.”

Since the release of his 2010 Alligator Records debut, American Patchwork, Osborne has toured virtually non-stop, performing with his own band, solo with Keb Mo, with The Stanton Moore Trio, alongside Karl Denson’s Tiny Universe and with Luther Dickinson as well as with The Voice Of The Wetlands All-Stars. He appears on Galactic’s song “Dark Water” from their Ya-Ka-May album, and in 2011 produced and played on critically acclaimed albums by Tab Benoit, Johnny Sansone and Mike Zito. Along the way, he also found time to write and record the next chapter in his still-unfolding career, Black Eye Galaxy.

Recorded at the famed Dockside Studio in Maurice, Louisiana, Black Eye Galaxy was produced by Anders along with engineer Warren Riker and Galactic’s Stanton Moore. Sounds on the album range from heavy electric mayhem to joyous acoustic melodicism, lyrics move from the darkest depths to the healing power of love. Black Eye Galaxy is a personal record for Osborne, but one with universal themes. “It’s about being on the other side of chaos and putting things back together,” he says. The title is an unambiguous metaphor for Osborne’s life as a traveler, a musician, an immigrant, a recovering addict, and as a husband and father.

The album is a journey of sorts, following the main character (based on Anders’ own life experiences) from the uncontrolled, primal chaos of “Send Me A Friend”to the inner peace of “Higher Ground.” The disjointed and brutally honest “Mind Of A Junkie” leads into the warm and hopeful “Lean On Me/Believe In You.” The gentle “When Will I See You Again?” finds Anders rebuilding broken relations, while the feral and confrontational “Black Tar” (co-written with Little Feat’s Paul Barrere) says farewell to a dark past. The final four songs — “Tracking My Roots,” “Louisiana Gold,” “Dancing In The Wind,” and “Higher Ground” — bring an almost ecstatic tranquility after the intense stress and turbulence of the beginning of the album. From ultra-heavy and challenging to sweetly soul-soothing and melodic, Osborne’s guitar work, like his vocals, is simply mesmerizing. Black Eye Galaxy is a harrowing but ultimately uplifting cycle of richly detailed songs that are musically and lyrically thought-provoking, exhilarating and completely engaging.

Live, Osborne is a force to behold. His wildly energetic, physical performances find him ripping notes out of his guitar, forcing out intense steel-on-steel slide solos, pouring his entire soul into his vocals. His piercing guitar playing, slide work and fluid finger picking (oftentimes happening simultaneously) are simply unmatched. His use of Open D tuning (a rare choice for a guitar virtuoso) gives his fretwork a signature sound and feel. “I first heard Open D on Joni Mitchell’s Blue,” he says, “and my fingers just fit the tuning.” His influences range from Ry Cooder and Robert Johnson to the great horn players like Miles Davis and John Coltrane.

Past gigs include repeated appearances at The New Orleans Jazz & Heritage Festival, stops at Bonnaroo, The High Sierra Festival, The Telluride Blues Festival, The Hollowbaloo Music & Arts Festival in Honolulu, The Voice Of The Wetlands and an appearance at the 2008 Democratic National Convention. He has toured North America and Europe extensively, and is constantly in demand as a guitarist, songwriter and producer.

Since his recording debut in 1989, Osborne has written virtually all of his own material and contributed memorable songs to a wide variety of artists. Two tunes co-written by Osborne appear on blues great Keb Mo’s Grammy-winning 1999 release Slow Down. Country superstar Tim McGraw scored a #1 hit with Anders’ song “Watch The Wind Blow By.” Osborne’s compositions have been covered by artists as diverse as Brad Paisley, Tab Benoit, Jonny Lang and Kim Carnes. His song “What’s Going On Here” appeared in the 1996 feature film Fled, and Osborne, along with Ivan Neville, wrote and recorded the title track for the 2010 Kate Hudson film Earthbound. He can also be seen performing in a recent episode of HBO’s New Orleans-based drama, Treme.

Osborne was destined to live in New Orleans, and it’s no surprise he’s become one of the city’s favorite sons. His path home, however, was a long and winding one. He was born in Uddevalla, Sweden in 1966. His father was a professional touring jazz drummer who played all over Europe and was exposed to a lot of styles of popular American music. He brought home reel-to-reel recordings of jazz, R&B and early rock ‘n’ roll from artists as diverse as Little Richard, Fats Domino, Bill Haley, Art Pepper and Miles Davis. As a teen, Anders started playing guitar and listening to Bob Dylan, Neil Young, Jackson Browne, and Joni Mitchell records. He fell in love with the vocal styles of Ray Charles, Van Morrison and Lowell George. Then he heard the blues of Robert Johnson and recordings of African drumming, and suddenly, everything clicked. “Blues connected everything together for me,” Osborne recalls. “The early rock, the R&B, the jazz, the singer-songwriters. Blues was like a thread running through everything.”

With a serious case of wanderlust, Anders began traveling on his own at 16. For the next four years, he hitchhiked across Europe, North Africa, Southeast Asia and the Middle East, earning money by doing odd jobs and performing on the street or in bars at every opportunity. He worked assembly lines in Israel and dug ditches in Greece. He picked fruits and vegetables in many locales, following the harvest seasons across Europe. He wrote constantly, soaking up the life experience and honing his craft.

In 1985, after landing in New York with only $5.00 in his pocket, Osborne hitchhiked to New Orleans to meet up with a friend. “Once I got to New Orleans, everything I heard in my head — the music, the way people treated each other — was happening. I knew I was home.” He naturally absorbed the spirit of the Crescent City into his soul, as he was fully embraced by the city’s vibrant music community. Shortly after moving there, he found out that his grandfather, a sailor, had lived in New Orleans for many years. His grandfather then began telling him vivid stories of the city, and sharing old photographs. “I just felt connected to his memories,” Osborne says, “and I knew I was where I was supposed to be.”

Anders spent his first few years in New Orleans writing and developing his sound and style, all the while continuing to soak up the music of the city. He cut his first two albums for the independent New Orleans-based Rabadash Records in 1989 and 1993. The excitement surrounding those releases led to a major label deal with Sony’s Okeh imprint in 1995. Osborne released a series of successful albums for Shanachie and MC Records, all to wide critical and popular acclaim, before joining forces with Alligator Records.

With the 2010 release of American Patchwork, Osborne’s fame suddenly reached a whole new level. Critics went wild, with OffBeat saying, “American Patchwork is the album Osborne fans have been waiting for. The record is a focused and tuneful triumph. Osborne’s gifts as a guitar player are significant. His voice is so emotionally intense it feels like an explosion. He writes with remarkable eloquence…this is the living definition of great art.”

In the studio and in concert, Anders Osborne channels the music throughout his entire body, becoming a whirling dervish of pure energy. Blurt says, “This is modern music at its transcendent best.” Paste adds, “He is wildly diverse, thoughtful and raw.” With Black Eye Galaxy, Osborne’s star has exploded into the universe, fully formed and spinning freely in its own unique direction.