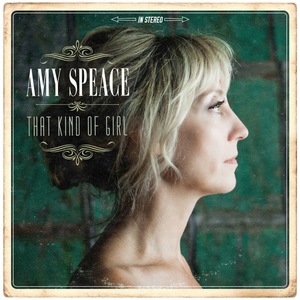 Amy Speace’s new release, 'That Kind Of Girl' on Windbone Records is an intimate, heart-wrenching exploration of a love affair and it's aftermath, the dangerous addictive dance of love and alcohol, and the sobering journey out of it.

Recorded live in three days to capture an emotional immediacy, rife with stirring strings, weeping pedal steel and full of melancholy, these songs are not only an exorcism of the soul but an exploration of the impossible secrecy of "the other woman."

The twelve original songs on 'That Kind Of Girl' were recorded in East Nashville and feature producer Neilson Hubbard on drums, guitarists Will Kimbrough (Rodney Crowell, Todd Snider) and Carl Broemel (My Morning Jacket), Eamon McLoughlin on strings and mandolin, Danny Mitchell on keys and horns, and Dean Marold on upright bass.

Amy's 2013 record, 'How To Sleep In A Stormy Boat,' was a "really powerful" (NPR) set that received raves from the NY Times, Billboard and American Songwriter, who called it "her most intense and passionate set

Born in Baltimore and now living in Nashville, Speace is a former Shakespearian actor whose fans include Mary Gauthier and Judy Collins, who has covered Amy's song "Weight Of The World." Amy has toured alongside Alejandro Escovedo, John Fulbright, Guy Clark, Ian Hunter, and Nanci Griffith.

Visit amyspeace.com for the latest news and tour dates.