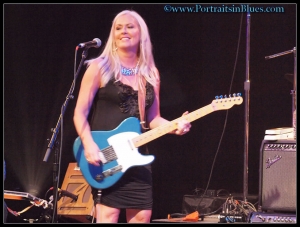 Born and raised in the Chicago area, Amy Hart got her start playing Blues on festival stages. In the eighties as a youngster she won a few radio contests and ended up outselling the Rolling Stones "Emotional Rescue" with her cut "Sad Love Song" at number one for two weeks on WLUP FM98 from the station sponsored Chicago Rocks Volume One compilation. From Blues to Rock, and then to R&B...

In 1985 she moved to L.A. and drifted more toward R&B, writing and recording with Tim Tobias under John Ryan's (Styxx, Doobie Bros.) production. She scored a spot on the teen hit soundtrack to the movie, "Girls Just Wanna Have Fun" with "Too Cruel" released on Mercury Records. After dozens of club dates with Tobias, she hit the road out of Lake Tahoe and played the desert circuit for the next few years.

In 1995 Amy moved to Nashville,and was quickly embraced by the singer/songwriter community. She was featured regularly at clubs like The Bluebird Cafe, The Broken Spoke, The Exit/In and The Sutler, and she played a live radio broadcast from Tootsie's Orchid Lounge to London as part of Fan Fair 01 on Ritz Radio.

She finished "Every Beat of My Heart" in 2000, and gained radio attention in Europe and the Midwest. She debuted her new material with a hot session player band featuring Larry La Rue, Woody Lingle, Mark Thompson at The Exit IN on the Western Beat Roots Revival hosted by Billy Block. She is featured on the Western Beat WSIX Playlist. Critically acclaimed the cd is still in release and distributed worldwide electronically by The Orchard. Reveiws have been great and a common thread has been the welcome blend of rock, country, and R&B, all staples of the true AMERICANA music genre.

In 2001 She moved to Florida and spent ten years playing the beaches on the emerald coast. Amy won a songwriting competition sponsored by Embassy Music in Nashville which featured her band live at the Country Music Hall of Fame. In 2003 she won a showcase as past of the MEANYfest (Musicans and Emerging Artists of New York) at CB's Gallery in Greenich Village. 2003-04 she played over 150 dates with her band in and around the Gulf Coast. In 2005 She won a spot on the Shooting Star Festival Stage, and was featured on the WPMI NBC TV 15 Clear Channel broadcast out of Mobile. The band was also featured on KSJ 95.5 FM live radio broadcast on the Breakfast Club in Mobile. In 2006 Amy Hart was discovered by WIKX/FM in Tampa and featured on the Red Hot Spotlight Competition as a regional artist. She finished the year in 4th place in the Clearchannel Stations top ten Florida country artists competition. In 2008 she was again featured as a top ten artist in the WIKX/FM Clearchannel Tampa 98.6 Red Hot Spotlight Artist challenge.

"Somebody Saved Me" written by Amy Hart and Dave Cox placed 13 in the international NSAI CMT Songwriter Competition 2009.

In 2010 She moved back to Nashville and began recording "Congratulations" after experiencing the economic woes of the Horizon Oil Spill. Her cd was released in November 2011 to rave reviews. The next three years were touring, traveling around the globe, headlining at The Himalayan Blues Fest, and writing. Most recently her newest release is "Live AT The Mayne Stage" on Vizztone/Painted Rock Records. Its a tribute to her traveling band, featuring PT Gazell on Harp, Gene Bush on Dobro, Wally Hoffmann on bass and Matt McDowell on Drums. The new cd is slated to be released on March 24th worldwide and features and hour long set of old and new songs recorded live for the PBS Broadcast of "Music From The Mayne Stage" to be released summer 2015


for more info go to amyhart.com