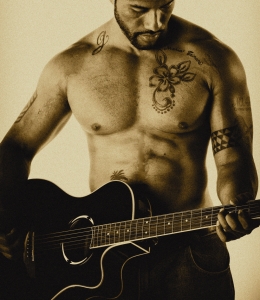 'Amu Uso is a living melting pot of cultural and musical diversity. The Samoan raised, long-time St. Louis resident has traveled the world since he was 10 months old listening to everything from Nigerian Chant to American Folk music. His favorite music is what he grew up listening to in his home; classic Samoan, Blues, and Hip-Hop. Uso blends these styles of music with his knowledge of deviant male behavior in his first music CD project 'The Dirt Men Do Volume 1'.

The rap artist/producer shuns all trends and delivers his original style of island guitar playing Hip-Hop with an 80's Funk appeal. Uso collaborated with South Side rapper Blu Streets and producer Kriss Kringle aka Big Sexy Kool DJ Kaos to create 'The Dirt Men Do' Volumes 1 & 2. Volume 1 is currently available free for download at UsoMusic.com. Also free on the website are ring tones, pictures, and the strip club video 'Come 2 The Front' with cameos by Chingy and Payback. Marketing primarily in the South Pacific Islands, New Zealand, and Australia, 'Amu received over 50,000 downloads in September 2009.

His business plan is to gain the support of the Pacific region and then navigate toward the States. "When you're working with very limited resources and you're selling a product, the best thing to do is find a target audience that will most likely embrace your invention. From that point you can take your earnings and experiment with other markets", says Uso. He continues, "It would be nice to start in St. Louis and move out but I found that international markets are more accepting of different styles and the St. Louis gate keepers seem to be locked into a certain sound. International music consumers that are into Hip-Hop also tend to seek new music. If you're at least familiar with their community I think they'll seek you first." He adds, "I think the only other way for me to start here in St. Louis is to flood the streets with my music to create a demand but the capital just isn’t there so I need to be conservative on my approach. I think the international market is the place to start".

'Amu Uso is currently a M.B.A. student at a St. Louis area graduate school. He is also a video producer and contract business writer. His latest project is authoring an online collection of humorous scriptures called 'The Chu'tch of Uso and the Late Pay Saints' at ShortofTheGlory.com.
1
What's This
Advertisement