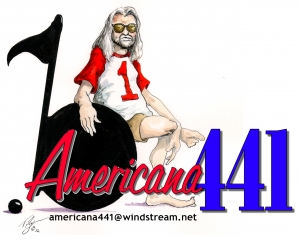 ATTENTION: ALONG WITH NEW SHOWS EACH FRIDAY, I'LL BE ADDING SPECIAL "THEME" SHOWS. THE "THEME" SHOWS WILL BE ADDED AS THE MUSE HITS ME.


With the dawn of 2019 Americana 441 begins its 24th year in production and its 13th in syndication. The program was created in 1996 by host and producer Ignatius Belvedere Wonderful as a vehicle for showcasing and promoting the brand-new format, Americana, that WJJC-AM radio in northeast Georgia was adopting. The station’s new owners wanted a fresh, forward-thinking format firmly based in roots music--bluegrass, honky-tonk, folk, true “classic” country, acoustic blues, and the like--that the station had been playing for years. Artists like Alison Krauss, Jim Lauderdale, Asleep at the Wheel, Shelby Lynne, and others received airplay alongside emerging talents like Junior Brown, Dale Watson, the Cornell Hurd Band, and Iris Dement. Classic country acts from the 30s, 40s, 50s, and 60s were intermixed with long-established folk, rock, and blues artists like Bob Dylan, Eric Clapton and Neil Young, whose more obscure music was long neglected or had rarely been aired on radio. George Jones, Merle Haggard, and Hank Williams joined Irma Thomas, Marcia Ball, and Ralph Stanley, and were heard over the airwaves in a format previously reserved for public radio or independent college stations. In addition to secular music, sounds of faith new and old, ranging from bluegrass, mountain, and country gospel to southern gospel and the traditions of the black church were now available as an alternative to the prepackaged gospel of mainstream radio. Americana 441 today features the latest in Americana along with classic and obscure country, plus the occasional track that defies categorization. It’s not just the same hundred “hit”songs reconstituted over a six-hour rotation. The show is hosted by I. B.Wonderful and recorded almost live at his semi-palatial Gladeland estate in the pecan groves of Point Peter, Georgia.