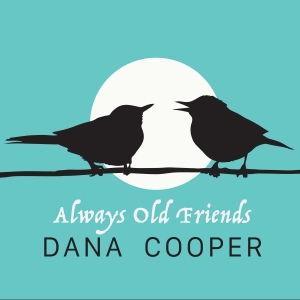 
"Dana Cooper’s heartfelt tribute to friendship, aptly titled “Always Old Friends,” stirs up the sentiment in ways that are both affecting and inspired. Given its resilient refrain and depth of emotion, it serves as a reminder that even in these days of division and distrust, we’re all still bound by the need to connect, while placing faith in friendship and the enduring bonds of kinship that sustain us throughout our lives. Both moving and memorable, it ranks a true anthem for the ages.
~ Lee Zimmerman, writer, reviewer and author

"'Always Old Friends' mixes the realm of strummy commentary alongside deliciously melodic writing that ruminates with the power pop playfulness of Jackson Browne and the roll-up your sleeves simplicity of early Springsteen." ~ Glide Magazine

"When my dear friend Robert Weingartz shared with me his inspiration for a song called 'You Can’t Make Old Friends' I was immediately intrigued. As we worked together bouncing different lyric ideas, melodic and rhythmic approaches back and forth the song began taking on new life. Based on our own friendship Robert and I came to the conclusion that our song had now become 'Always Old Friends'.

Haven’t we all met a complete stranger and felt an immediate kinship as if we had been friends all our lives? And haven’t most of us lost such a friend only to carry their memory through the rest of our days?

When I formed another immediate friendship with the multi-talented Dave Coleman he and I decided to record my next project together. The message of 'Always Old Friends' became our centerpiece as we built the track with Dave playing electric guitar, bass, drums, and keyboards. The addition of Jonell Mosser and David Starr on vocals brought even more soul and meaning to the song. Robert Weingartz leant his considerable expertise and production skills to the final arrangement and mixing of the track. The uplifting result is a testament to the depth of what friendship and dedication can accomplish.

Every time I sing this song I think of the enormous loss suffered all around this world in the last year and a half. All those friends waiting for us where the song never ends." ~ Dana Cooper

"'Always Old Friends' was a song that I have been wanting to write for many years. I was looking for just the right singer / songwriter as a writing partner, a 'troubadour of the people'. Someone that could both write the song with me, and then share it with the world. A unique talent, an artist with a lifetime of true, real-world experience, a troubadour extraordinaire that could deliver a simple story so powerful, so truly soul-touching that it compels everyone that hears it to stop and think of at least one old friend or family member… if only for a moment. That vision for this song was realized with my uber-talented brother of the pen, Dana Cooper. My hope is that after listening to this song, this story told, people will walk away with a smile on their face and a tear of joy in their eye."
~ Robert Weingartz

ABOUT DANA COOPER
Cooper’s lifelong passion & devotion to music began at age 2 in Kansas City. His father, George, was a huge influence. One of Dana's earliest memories is of his father taking him to the Calico Cat, popping a coin in the jukebox and listening to Dana sing along with Hank Williams & Ernest Tubb.

At age 20 a move to LA resulted in a record deal with Elektra Records where he recorded his first album with members of “The Section” Russ Kunkel and Leleand Sklar, as well as other luminary players Jim Horn, Al Perkins, Jim Gordon, Joe Osborne, and Lee Holdridge. This album still wins accolades today and was recently reissued on the Warner/Japan label.

After several years in California and a year recording in Seattle, Cooper moved to Texas where he wrote and performed with Shake Russell. They released several independent albums and one album for Southcoast/MCA.

His years as a Troubadour is measured by his impressive 28 Albums and Collection of Accolades:

• In the Spirit of Folk Award from Folk Alliance International (2015)

• Heritage Musician Award from The Pilgrim Center for the Arts in Kansas City,
MO (2014)

Cooper’s songs have been recorded by a variety of artists such as bluegrass singer Claire Lynch, Irish vocalist Maura O’Connell, Nashville songbird Jonell Mosser, as well as songwriters Pierce Pettis and Susan Werner. His incredible catalogue and musical sensibilities have led to endorsements from AirPlay Direct and Elixir Strings.

With his upcoming CD I Can Face the Truth Cooper faces hard truths head on with humor and heartfelt expression. Joining forces with Co-Producer and multi-instrumentalist Dave Coleman the two enlisted some of the best songwriters, singers, and musicians from the US and Ireland. Collaborators in the studio include Tom Kimmel, Kim Richey, Jonell Mosser, Maura O’Connell, Brother Paul Brown, David Starr, Rebecca Folsom, and Gillian Tuite. Expect I Can Face the Truth to be Released Early 2022 with an expansive CD Release Tour to follow.
16
What's This
Advertisement