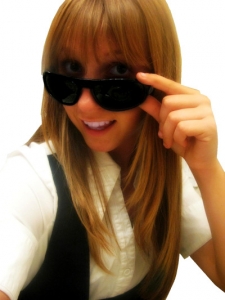 -How did you get interested in music in the first place?-

“My father is a professional musician, so I’ve always been surrounded by music from the time I was really young. I remember telling my dad that I wanted to go to work with him and he said if I learned to play the piano, that someday I could.”

Regional News
The winner of Rhode Island’s Got Talent, the first Talent Show hosted by the East Bay Chamber of Commerce, is Alissa Musto, a singer and pianist from Providence. She performed “Traveling Band Medley,” an arrangement she composed with her father that incorporated Creedence Clearwater Revival, Chopin, Mozart and Beethoven. Musto took home the $1,000 cash prize and will sing the national anthem at a 2009 Pawtucket Red Sox Game.

Checking Back with 'America's Most Talented Kid'
The last time we checked in with Alissa Musto, she was just 9 years old and had recently come off of America's Most Talented Kids. Now the young musician, who is 14 years old is getting ready to start high school in the fall. She will be attending Providence Country Day in East Providence, RI. Since Alissa's national television debut, she has continued her love for music and her passion for performing. With her father Billy Musto and sometimes solo, she performs at nursing homes, charity events, private parties, cable TV shows and talent shows all over Rhode Island and parts of Massachusetts singing and playing the piano. Some of the charity events she has performed at include 'Mayor Cicilline's Day in the Park', 'Toys for Tots Telethon' and PARI Annual Awards dinner just to name a few

Young Musician Takes Title in Rotary's New England Performs Event
Last Saturday 50 of the best performing artists were narrowed down to the top three in two age divisions at the Warwick Rotary New England Performs held at Toll Gate High School. Singers, dancers, actors, comedians, and performers took to the stage to impress the judges and for the chance to win $3,000 and title of New England Performs Champion.

Judges selected 21 acts to perform at the evening event. Six were age 12 and under, 15 were 13 and over.

The first-place winner for the 12 and under group is Alissa Musto, 11, from Rehoboth, Mass., who received $1,500. Alissa, a triple-threat pianist, singer and actress, is a sixth-grader at St. Mary Academy — Bay View. She has been studying piano since the age of 4 and continues today performing with her father at local retirement homes, nursing communities and charity events. Alissa is determined to continue her musical education and plans to keep on performing as well.

The Father, The Daughter and The Music
You gotta love the way this kid sings.

Like Britney Spears maybe? Please. The mere mention of the pop diva makes Alisa Musto wince as if confronted with a plate of spoiled food.

No, give her Sinatra. Give her the songs that have some pedigree, some staying power.

And give her a room to work. Put her at the keyboard and let her sing those great songs and maybe throw her foot up on the keys with that Jerry Lee Lewis move her father, Billy, taught her.

I saw her a few weeks ago, and she lit up the place. At one point, she shifted from Mozart to The Big Bopper.

Charming, said people in the audience. Delightful. One woman asked if she could hug her.