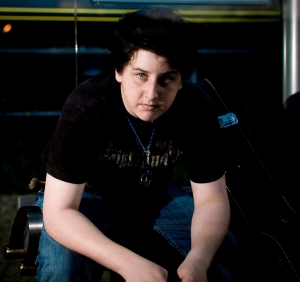 After performing almost 200 shows over the past 24 months promoting his debut blues album Nothing To Lose released March 2007, teen guitarist, singer-songwriter and Indie recording artist, Alex Tintinalli has received both local, national and international recognition.

In June 2008, Alex was awarded the prestigious Kitchener-Waterloo Arts Award for his contribution to the arts in his local community. In addition, Alex had a feature interview in the May/June issue of the U.K.’s largest blues magazine Blues Matters Magazine and more recently, Alex was awarded CBC Galaxie Rising Star Award at The Tremblant International Blues Festival in July 2008.

In addition to his debut CD release in 2007, Alex also released a DVD “Live At The Wax” which was recorded in front of over 400 fans during his CD release party in March that year. Alex’s music has also been included on two local blues compilation CD’s.

His intense, soulful music continues to receive world-wide airplay and has been in the top 10 of the charts of the Living Blues Report for January, February and March 2008 thanks to a growing fan base around the globe.

Currently Alex is getting ready to release his second record, a solo acoustic EP project due out on June 6th, 2009. His new music is a rhythmic blend of rich lyrics spilling over with an abundance of passion that will uplift your spirits and is often compared to the music of John Mayer, Jason Mraz and Jack Johnson.

This project was written and produced by Alex and represents his cross-over effort into a more soulful, rhythmic genre that is sure to please a wide age range of listeners.

WHAT OTHERS SAY ABOUT ALEX:

> The Alex Tintinalli Band featuring the newest Blues Guitar Prodigy Alex Tintinalli brings us back to a word not used to often nowadays, and that word is "Wow". In all regards "Nothing To Lose" is simply a blues soaked masterpiece, rich in texture and quality, which leaves those that listen to it simply wanting more of the same. --- John Vermilyea, Blues Underground Network

> Based on what I saw (I watched your video) and the tracks I heard (and I listened to them all): Hot Damn, there is a god! This kid demonstrates more genuine ability at fifteen years of age, than many musicians twice his age. As he hones his ability, I see others hanging up their axes in embarrassment. This kind of talent doesn't come around everyday. And this kid has it all in aces. --- Jackson, Mississippi USA

> I have witnessed very many talented young guitar players over the years, and most of them were impressive players in their own right, however playing a mean axe is one thing, but wailing, singing, writing and being a good front man are the attributes that get one noticed in the industry and most definitely by the audience and sets them apart from the "just another band" tag. At 15 years of age, Alex performs like a seasoned professional. In the 3+ short years since he started playing guitar, he has taken his love for the blues and turned it into a driving passion that is apparent in his presentation. He orchestrates the actions on stage with his band mates to play to the response of the audience, yet he always appears relaxed when playing which means he's having fun and that's what music is supposed to be about. ---London, Ontario Canada

> I'm thrilled to find a player so young with so much talent. Alex' guitar playing sounds mature and watching him grow as an artist will be a pleasure. "Nothing To Lose" blends both, classic and modern blues and is an enjoyable listen. A great start for Alex. --- Przemek Draheim, Polish Blues Radio Host

> If it wasn't for the voice, one would NEVER guess the artist was so darn young! And the singing is pretty mature for his age! --- Bingham, New York USA