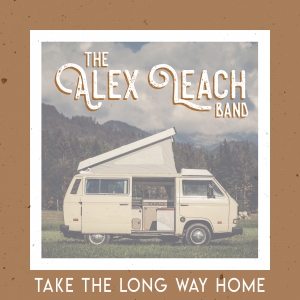 For a bluegrass musician raised on the classic sounds of Ralph Stanley and other hardcore artists, finding your own musical path can be a challenge, but on “Take The Long Way Home,” Alex Leach and his eponymous band manage to simultaneously tip their hat to tradition and announce that they’re following in no one’s footsteps. Indeed, the debut single for Mountain Home Music Company, produced by Jim Lauderdale, shows off a healthy dose of creativity that builds on — but is never overwhelmed by — a variety of influences.

Simultaneously thoughtful and jaunty, melodic and philosophical, “Take The Long Way Home” was, fittingly enough, born on a drive — in this case, by Leach’s wife and bandmate Miranda. “The tune came to me while I was taking a long drive back home to clear my mind,” she recalls. “I was aiming to get some things out of my head and this song popped in instead. By the time I’d gotten home from a 25 minute drive, the chorus had been written.”

“I remember when Miranda first started writing it and thinking how catchy it was,” Alex adds. “What started as a chorus recorded in Miranda’s song notes became a full song written while we were out together for a countryside picnic. It was truly an effort written by us together.”

With its ever-changing chords and rush of lyrics, the song is reminiscent of the first wave of “progressive” bluegrass created by artists like the Country Gentlemen, but with a couple of unique twists. “The path less traveled leads me where I want to go...not the quickest way to get there, but adventure sure waits somewhere,” Leach sings over driving rhythm, supple fiddle (from guest John Rigsby) and crackling banjo — and then the song flips to an unexpected yet just-right a capella chorus before a surprise key change brings Miranda’s soprano to the fore in a final reprise of the song’s essential message.

“I love Alex’s writing, picking and singing, and I think ‘Take The Long Way Home’ is a new classic,” says Lauderdale. “The Alex Leach Band really shines and shows how great they are together on this one. It’s a perfect intro to what is yet to come off of this album — a taste of what you can look forward to hearing in the future.”