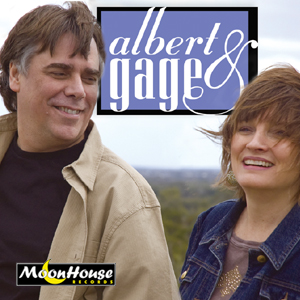 In Austin, Texas—a town overflowing with gifted singer/songwriters and guitar players—Christine Albert & Chris Gage have a twelve year track record of making beautiful music together, although both musicians' individual pedigrees are far more extensive. Over the course of six duet albums, the duo has demonstrated that disparate backgrounds do not preclude musical soul mates from finding one another.

The Houston Press noted, “From George Jones and Tammy Wynette to Richard and Linda Thompson, male-female duets are one of popular music's most delightful permutations. And the Austin-based duo of Christine Albert and Chris Gage easily slot right in with the best.”

Onstage, Albert's slender, dark beauty contrasts strikingly with Gage's craggy good looks and how gracefully they complement each other is easily apparent. In 2003 Albert and Gage released their first live recording, Albert and Gage at Anderson Fair. Dirty Linen commented that the set, which is reflective of their typical live performances, had “energy, humor, really fine duet singing, strong leads, original harmonies, a strong sense of partnership, personality, and musicality” and Sing Out! called it “a cohesive and exciting exploration of the roots of popular, mostly American, music”.

When asked about her partnership with Chris Gage, Christine said, “Musically, I like to go in lots of different directions”—from country songs to French chansons—“and Chris goes right along with me. It's not just that he plays bluegrass or folk or blues, but that he plays it all with so much integrity and soul.”

“After being a sideman for several years I was ready to start my own band again,” recalls Gage. “I wasn't sure exactly how that would manifest, and then I met Christine. What we brought out in each other was magical.”

Gage is a journeyman musician and South Dakota native who literally began touring in a station wagon at age 15. In the mid-Seventies and early Eighties he led the popular midwestern country-swing Red Willow Band, and from there graduated to an eight-year tenure on piano with guitar virtuoso and country star Roy Clark. After moving to Austin in 1991, Gage began commuting to San Antonio to take the reins as musical director for the Fiesta Texas theme park.

But it was during (and following) his next incarnation, as bandleader for West Texas alt.-country singer/songwriter Jimmie Dale Gilmore, that he began to carve out his own place in the Austin scene as an in-demand session player, accompanist and producer. It was with Gilmore that Christine first heard Chris play and in 1997 Albert & Gage was formed. The duo later toured as an opening act for Gilmore and as members of his ensemble.

Christine cut her musical teeth in northern New Mexico, in the chic environs of Santa Fe and in the rough-and-tumble biker bars out along the Turquoise Trail, after moving west from her childhood home in upstate New York. Along with old friend and fellow New Mexico chanteuse Eliza Gilkyson (whom she also cites as an early influence and inspiration), Albert relocated to Austin in 1982 and began to distinguish herself as a singer-songwriter in a town where the bar for such artists is set very high indeed.

Christine Albert's French grandmother lived in Paris and her mother was born in Switzerland, so perhaps it's inevitable that the occasional Edith Piaf song migrates into her sets of original material and carefully chosen covers. She has recorded a series of acclaimed albums of lovely Franco-Lone Star fusion - Texafrance (1992), Texafrance-Encore (2003) and Paris, Texafrance (2009).

Christine released several other solo albums during the years before she met Chris, and had established a solid name on the Texas scene. In 1996, she was voted Female Vocalist of the Year in the Kerrville Music Awards poll associated with the prestigious festival, and she has appeared on Austin City Limits, both with Gilkyson and on her own show. A longtime community activist, Albert is also known for her work on behalf of survivors of sexual assault and is cofounder/president of “Swan Songs”, a non-profit that fulfills musical last wishes by organizing private concerts for individuals with a terminal illness. Ms. Albert also currently serves as a Trustee on the National Board of Trustees of The Recording Academy.

With the exception of 1997’s Jumpin’ Tracks, Albert and Gage’s albums have been recorded at their own MoonHouse Studio (which moved to a commercial location in 2007) and released on the artist owned MoonHouse Records. Chris maintains a busy studio schedule and over the years they have expanded MoonHouse Records with Gage productions by fellow Austinites Cowboy Johnson and Michael Austin, as well as Americana singer/songwriter Abi Tapia.

The duo’s most recent CD, Dakota Lullaby(2009), features twelve songs by an unheralded songwriter from South Dakota – Tom Peterson; it’s a marriage of great songs with just the right voices.

Christine Albert and Chris Gage are well respected, seasoned music business veterans, but the joy they experience making music together is fresh and infectious. “They can rock, boogie, swing, trot down country roads and stride down sophisticated boulevards and make it all sound as it should: like parts of a unified whole rather than a mishmash of different styles. Albert and Gage have global class, musicality and charm.” (Houston Press) You can’t ask for more than that.